All aboard – An Irishman’s Diary about the Cavan & Leitrim Railway 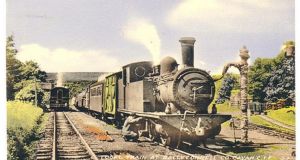 The country’s most idiosyncratic railway system

The Cavan & Leitrim Railway was the last all- steam, narrow-gauge railway to survive in Ireland; it had also managed to be the country’s most idiosyncratic railway system.

It all began in 1887, after the 3ft-wide track had been laid from Belturbet in Co Cavan to Dromod in Co Leitrim. At Belturbet, it connected with the Great Northern Railway; at Dromod, it linked with the main Dublin to Sligo line.

The hub of the system was at Ballinamore, where the company had its workshops. There was also a link from near Ballinamore to Drumshanbo and Arigna, although the final 4½-mile connection from Arigna to the nearby coal mines was not completed until 1920. The original railway had cost £60,000 to build.

When the company started, eight locomotives were purchased and seven of them were named after the first names of daughters of directors. The eighth director refused to lend his daughter’ s name to the last engine, so it was called Queen Victoria. In its early days, the railway looked like something out of the Wild West, as the locomotives had “cow-catchers” at the front, while early passenger carriages had verandahs and platforms at each end.

The trains were often so slow that intending passengers could walk alongside and simply hop aboard. Tickets were issued wherever they got on the train. The schedules were often nominal, as train crews were liable to stop along the way and have chats with friends and neighbours. One inspector of the rails carried a gun so that he could go wild-fowling when he was not attending to his duties.

Two successive station masters at Belturbet vanished. They each helped themselves to £7 in cash, enough for a ticket to America, with £1 left over. At a crossing just outside Mohill, trains stopped on demand for the Rev J Gargan Digges, a director of the company and renowned for his beekeeping. He was the private chaplain on the Lough Rynn estate.

In the aftermath of 1916, train crews played their part. In 1917, the Queen Victoria locomotive was painted green, white and orange and was promptly dubbed the Sinn Féin engine.

In 1920, a man from Belfast called Capt CV Rogers was brought in to bring some semblance of punctuality and discipline to the railway workers. One night, he was awoken from his slumbers by armed men, who marched him the 12 miles to Killeshandra. The next day, he fled the area.

Whenever Black and Tan soldiers boarded the trains, the crews walked off. As a result, drivers and firemen often went for months without pay. In 1922, the new manager, William McFarlane, was taken to Ballinamore station and made to sign a letter reinstating the sacked workers.

The Cavan & Leitrim Railway was absorbed into the Great Southern Railways during the 1925 railway amalgamations. The railway workshops at Ballinamore were closed and overhauls shifted to Inchicore; local working practices on the railway were extinguished. The Rev Digges lost his own private halt.

Roads were improving and cars were starting to come into vogue. Fewer women used the train to go and do their weekly shopping in Mohill or Drumshanbo. The latter had a station nameplate for years, put up by the Great Southern Railways, that read “Drumshambo” .

The railway finally closed down in 1959. During the 1950s, with three scheduled trains a day in each direction, station staff had so little to do that station gardens flourished.

The death knell had come in 1958, when the ESB opened a new generating station at Arigna, making the railway’s transport of Arigna coal redundant. One of the old steam locomotives can now be found in a transportation museum in New Jersey, while the Ulster Folk & Transport Museum also has an old locomotive and a passenger carriage.

A new railway company was set up in 1993, with the aim of restoring the nearly six miles of track between Dromod and Mohill, but this never happened.

Until a couple of years ago, steam train trips were possible on a short stretch of track at Dromod. A substantial museum was opened at Dromod; it now includes not just railway memorabilia, but many other transport artefacts. A railway museum is also open at Belturbet, also with lots of material on the old railway.

The Cavan & Leitrim Railway was unique in many ways, much loved in the countryside through which it ran, but as with the other regional railway systems in Ireland, the economics provided unsurmountable.

1 Sand-hued cyclepaths changing the face of south Dublin coast
2 Irish in Australia: ‘It’s not so easy for some people just to kick back home’
3 Meat plant clusters may be down to softly-softly approach
4 Midlands lockdown: ‘Why shut down Offaly and leave Dublin open?’
5 Midlands lockdown: Movement restrictions in place for residents of Kildare, Laois and Offaly
Real news has value SUBSCRIBE