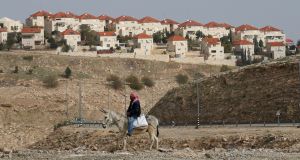 A Palestinian man rides a donkey near an Israeli settlement in the occupied West Bank. Photograph: Baz Ratner/Reuters

The euphoria with which western, including all European, leaders and various worthy international organisations greeted events in 2011 in the Middle East as the “Arab Spring” was always misplaced.

It was based on startling ignorance of the region, its history, psyche, culture, religious divisions both within and between Sunni and Shia Islam and internal and international political rivalries.

In other words, it was a political fantasy disconnected from the reality of a complex and difficult region.

On Sunday, January 15th, foreign ministers and representatives of 70 states met in Paris to engage in another episode of political fantasy disconnected from reality.

All conflagrations in other parts of the Middle East were entirely ignored. The continuing death and destruction occurring in Syria were not mentioned.

With excessive ceremony and fanfare, in the absence of the principal protagonists, the states represented reaffirmed between themselves the blindingly obvious, that “a negotiated solution with two states, Israel and Palestine, living side by side in peace and security is the only way to achieve enduring peace” between Israelis and Palestinians.

Referencing various UN resolutions and other past failed initiatives, the conference participants called on each side to independently demonstrate its genuine commitment to the two-state solution and to refrain from unilateral actions that prejudge the outcome of negotiations on final status issues, including on Jerusalem, borders, security and refugees.

Reference is made to the sides “disassociating themselves from voices that reject” a two-state solution without any express demand that they do so.

From post-conference commentary, despite the ambiguous language, it was clear the unidentified “voices” referenced were solely those of some current members of the Israeli government.

The “importance of addressing the dire humanitarian and security situation in the Gaza Strip” is “noted” and calls made for swift steps being taken to do so.

No mention is made of Hamas’s malevolent decade-long destructive rule in the strip; the divisions between the Fatah-controlled Palestinian Authority (PA) and Hamas; their many failed attempts to implement agreed measures to resolve those divisions; the total rejection by Hamas of the two-state solution; President Mahmoud Abbas, Fatah and Hamas lacking any current democratic mandate to rule; Palestinian elections having last been held 10 years ago; and the factions’ mutual fear of the outcome of any poll that might take place.

The 70 states participating, including the Irish State, represented by Minister for Foreign Affairs Charlie Flanagan, chose to ignore the current realities of the Israeli/Palestinian conflict and the real obstacles to a permanent peace.

At their core is a complete lack of trust between the parties and the inconvenient fact that the Israelis currently have no party with whom to negotiate which credibly and democratically represents Palestinians living in the West Bank, Gaza and in East Jerusalem.

Although the international community chooses to ignore it, Gaza and the West Bank have for 10 years been two separate political entities ruled by Palestinian factions in continuing conflict with each other and incapable of agreeing between themselves the parameters of any potential resolution with Israel.

For fear of his life, the Palestinian president, Mahmoud Abbas, has been unable to set foot in Gaza for those 10 years.

The Palestinian side is incapable of credibly demonstrating its commitment to the two-state solution as called for in Paris and the PA totally lacks the political capacity to ensure its long-term implementation.

Moreover, instead of lowering expectations to create the required political support for an enduring peace settlement that will inevitably require that each side makes concessions, the PA has consistently heightened expectations by maximising its demands and demonising Israel at every opportunity on the world stage.

The truth is it is highly unlikely Abbas and the PA could currently obtain the political mandate required to enter into and implement any settlement that involves a compromise on Palestinian demands and that will guarantee Israelis an end to conflict and future peace and security.

This will not change should the latest Russian-sponsored reconciliation agreement to end fratricidal internal differences between Hamas and Fatah be implemented.

Today, post-Paris, a two-state solution is as much a desert mirage and political fantasy as was the Arab Spring in 2011.

Experience has proved that statements such as the one issued in Paris and recent UN-related resolutions on the conflict do not positively contribute to the achievement of a settlement nor end the PA lauding as holy martyrs those who commit terrorist atrocities.

Their content is merely cherry-picked by Abbas and the PA for propaganda purposes and to claim what are pyrrhic political victories of no lasting value.

What is needed is less political grandstanding and more international encouragement for the creation of circumstances that would facilitate the parties to engage in substantive direct talks.

Before any such talks take place, Palestinian elections are essential to create a united Palestinian leadership with a democratic mandate.

Confidence-building measures are also required to open the door to direct engagement and the creation of trust between the parties. Foundations should be laid for realistic constructive engagement to replace detrimental destructive confrontation.

Instead of our obsessing, together with other EU member states, on the possibility of the US relocating its embassy in Tel Aviv to Jerusalem or supporting the false narrative that Israeli settlements are the only obstacle to overcoming the present impasse, perhaps our Minister for Foreign Affairs could give robust public expression to these insights directly derived from our own peace process and share them with the Taoiseach and his EU ministerial colleagues.

Alan Shatter was minister for justice between 2011 and 2014