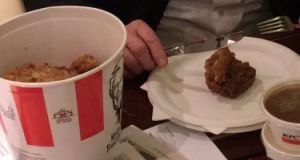 Trump’s attitude to his own health is relevant here. He’s the type of person who would only take his face out of his bucket of KFC fried chicken to laugh in the face of Big Government lecturing him about his “five-a-day” intake.

Donald Trump is obese. At six foot three inches in height and weighing in between 18 and 19 stone, his BMI (Body Mass Index) is above 30; making him not just common or garden overweight but full-on obese. And obesity - particularly in a septuagenarian such as Trump - is a major health risk.

Trump, who has verbally abused many a woman for being a “fat slob” should be able to take a bit of his own body-shaming medicine.

Despite his private doctor informing us last year that “Donald Trump would be the healthiest individual ever elected to the Presidency”, the U.S. President is an obese, elderly man who, by his own admission, gets next to no exercise, sleeps for less than five hours a night and exists on a diet of fast-food.

This week he begins a new and highly stressful job. The decisions he takes have potential repercussions on all our lives.

When Barack Obama bounded into the White House eight years ago aged 47, he did so as a good-looking middle-aged man. He left it last week with a tired, sunken face, his hair wizened and grey, looking like he had just come off an almighty bender.

Trump’s lifestyle matters because he makes a virtue out of it: he loudly boasts about his fast food diet - and actively promotes McDonald’s food: “The Big Macs are great, the Quarter Pounder - it’s great stuff”. He posts pictures of himself on Instagram eating from a big bucket of KFC; he loves burnt, overcooked steaks - “it would rock on the plate, it was so well done” his longtime personal butler once noted.

In times of stress he reaches for Burger King and Diet Cokes. He exists on fast food mainly because of his self-admitted “germ phobia”, saying “I’m a very clean person. I like cleanliness and I think you’re better off going there (fast food outlets) than maybe someplace that you have no idea where the food is coming from. It’s a certain standard. I think the food’s great”.

As everyone knows, high-fibre, low-GI almonds are the food of liberal losers; no-nonsense Doritos are a proper man’s snack food.

Trumps talks about cancelling White House state dinners - “We should be eating a hamburger on a conference table and forget the state dinners”.

With all of this Trump is not just repositioning himself as an Average Joe - as much as a billionaire New Yorker whose house is a gold penthouse can be an Average Joe - but also he is shrewdly mining a rich seam of voter-friendly nostalgia and retrophilia.

And this is where it gets worrying - and why his cavalier attitude to his own health is causing a tense, nervous headache within the medical world. Trumpalgia (his hankering for a Norman Rockwell America) allows him to talk about the good ol’ days in mythic terms.

“When I was growing up, autism wasn’t really a factor. Now, all of a sudden, it’s an epidemic. Everybody has a theory - mine is it’s the shots (vaccinations)” he alarmingly said once.

Of all the fringe groups that have been emboldened by Trump’s victory, the dangerous and irresponsible anti-vaccine movement have been quickest to extract a concrete promise out of the new President.

The fringe anti-vaxx movement - led by people with no medical or scientific qualifications - believe that vaccinating against dangerous diseases leads to autism and a wide range health of problems. There is not a shred of medical proof to support their claims.

Trump has issued a barrage of ridiculous falsehoods and conspiratorial tweets on the subjects of vaccines causing autism. These are bigly lies.

During his busy campaign, he took the time to meet with the now discredited ex-doctor Andrew Wakefield who originated the vaccines causes autism claim. Wakefield’s licence to practise medicine in the UK has been stripped for “serious misconduct”.

Two weeks ago Trump met with Robert F. Kennedy Jr (of the famous Kennedy family). RFK, believes in the conspiracy theory that the U.S. government are hiding evidence that vaccinations could cause autism.

After their meeting, RFK told the media: “President Trump has some doubts about the current vaccine policies, and he has questions about it … he asked me to chair a commission on vaccine safety and scientific integrity”.

Anti-vaxx beliefs usually run in tandem with a suspicion and distrust of Big Government. With the new U.S. President having once publicly stated that vaccines constitute “doctor-inflicted autism”, there now exists the perfect breeding ground for their whacked-out, fringe lunacy to thrive.

Trump’s attitude to his own health is relevant here. He’s the type of person who would only take his face out of his bucket of KFC fried chicken to laugh in the face of Big Government lecturing him about his “five-a-day” intake.

Among his first moves as President were to ask a conspiracy theorist to chair a commission on vaccine safety and then to start rolling back the Affordable Care Act (Obamacare) - which facilitated working Americans in getting their children vaccinated.

The global medical community (trained and qualified and working on the front-line) say vaccinations save millions of children’s lives and increase our lifespan by decades.

Anti-vaxxers make bizarre and hysterical claims which evidence-based medicine has refuted. They are contemporary flat-earthers who, disturbingly, now have an ally and sympathiser in the Oval office.

But here’s the thing Donald - you can’t build a wall around or deport polio, diphtheria, measles and mumps. If they are not vaccinated against they can and will kill.

Do you want some fries with that advice?