Airbnb in Ireland: Rental rules welcome but red tape must not restrict homeowners 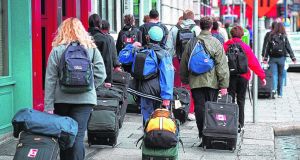 Airbnb: there are more than six million listings in over 81,000 cities on the platform and more than half a billion guests have travelled with it. Photograph: Dara Mac Donaill

Airbnb is built on the principles of making communities stronger and spreading tourism benefits to local families and businesses. Since we were founded 10 years ago, the Airbnb community has changed the face of travel, allowing more people the opportunity to take affordable and magical trips outside of the usual tourist hotspots, bringing economic benefits to more businesses and enabling people across Ireland to share their homes, start a business and boost their income.

We are proud to call Dublin our international home, and we want home sharing to grow responsibly and sustainably in Ireland. This is why have called for fair and proportionate regulation of short-term letting and recently proposed clear and enforceable rules that apply to the whole industry for the Government to consider.

We have already collaborated and worked with 500 governments around the world and have led the industry in developing clear home-sharing measures and promoting healthy tourism, remitting more than $1 billion in tourist taxes.

We always welcome working with local authorities and governments on rules that work for everyone and that continue to help spread the benefits of tourism to local families, small businesses and their communities.

While we welcome the Government’s plans to introduce new rules in Ireland, we remain concerned the current proposals create further red tape and bureaucracy for regular people sharing their home and will prove ineffective and unenforceable, which could end up costing the taxpayer millions. They could also have far-reaching, unintended consequences for thousands of families and businesses.

The Government’s stated intention is to protect long-term residential housing stock, and as a Dubliner I am all too aware of the current housing issues faced by our city and the impact of it on our communities, especially in some parts of urban areas. However, these existed long before Airbnb began and countless experts agree that home sharing has no significant impact on housing.

The Airbnb community has played a significant role in the success of tourism in Ireland, bringing visitors in from around the world

According to the Central Statistics Office, there are more than 10 times as many vacant dwellings (245,460) in Ireland than active listings on Airbnb, and house building per capita in Ireland is the fourth-lowest in the EU, while population growth is five times the EU average.

An analysis of entire homes listed on Airbnb shows that they account for less than 1 per cent of total housing in Ireland, and over three-quarters of hosts on Airbnb say that they are hosting in their primary home. Hosts on Airbnb also keep the overwhelming majority (up to 97 per cent) of the price they charge for their space and 49 per cent say this additional income helps them afford their home and make ends meet.

It’s our view that introducing restrictive caps on the primary homes of local people and complicated notification and planning approval requirements will, rather than addressing housing concerns, be more likely to hurt local people by withdrawing a much-needed economic lifeline, limit consumer choice and damage the indigenous tourism sector.

The Airbnb community has played a significant role in the success of tourism in Ireland, bringing visitors in from around the world and revenue to towns and cities, including many off the beaten track. In 2017, travel on our platform boosted the Irish economy by over half a billion euro (€506 million).

This growth is powered by our global community of hosts, who care deeply about where they live and work – they pay their taxes, welcome travellers from all over the world and, together with guests, add significant economic, cultural and social value to their local economies. Despite this, these hosts, as well as residents and communities across Ireland who depend on short-term letting, haven’t been given a chance to voice how the current proposals could affect them.

Rushed changes could have a serious impact on local families, businesses and economies

The Airbnb community started when two students rented out airbeds in their apartment in San Francisco. Ten years later, we have announced there are more than six million listings in over 81,000 cities worldwide on our platform and more than half a billion guests have travelled with Airbnb. We also recently revealed that a castle in Galway is the most-visited private room on Airbnb in Europe, with the income from home sharing helping to maintain the 600-year-old property.

Regulation of this growing form of tourism will bring much-needed clarity for hosts and the sector in Ireland, and is in everyone’s best interests. The challenge is crafting legislation that balances the needs of everyone, and we want to support the Government with this, like we already have in countless cities around the world, most recently in London and Denmark.

Rushed changes could have a serious impact on local families, businesses and economies – and no impact at all on the real challenges that face Irish communities.

Airbnb has grown because it reflects the way people live, work and travel in the 21st century, and we want to see any regulations in Ireland do the same.