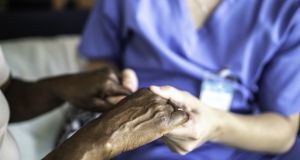 Our response to poor care should be to right it through a sympathetic and therapeutic approach. Photograph: iStock

I have been working as a geriatrician and advocate with people living with dementia for nearly 35 years, as well as supporting and engaging with my much-loved family members who were affected during this time. One of the biggest advances in the field has been the effort to understand better the inner world of those living with dementia when there are barriers to communication arising from changes to memory and language. This is something that may seem counter-cultural in a society prioritising intellectual prowess, but our human condition is so much more than this.

As eloquently put by the ethicist Stephen Post in The Moral Challenge of Alzheimer Disease, we need to convert Descartes’ “I think therefore I am” to “I will, feel and relate to others while disconnected by forgetfulness... but still I am”. These principles were the basis of the HSE’s Understand Together programme of publicity emphasising our common fellowship with all of us with memory problems.

These are also the elements we try to teach in dementia training for healthcare staff, and seek ways in interpreting what people living with dementia are communicating with us, through gesture, behaviour and other means. We hold that people living with dementia are able to communicate their wishes into very late stages of dementia to those who are willing to engage with them, even if just removing a drip or refusing thickened fluids for swallow disorders.

We also try to encourage using activities, arts, creativity and memory resources to bring to the surface possibilities for engagement and enjoyment, as I had in my relationship with my mother in her last two years of life with dementia in a nursing home.

So it was all the more shocking to learn of a case in recent years in the Netherlands where a woman living with dementia had made an advance directive for euthanasia should she be admitted to a nursing home. To those involved with the care of dementia, she had clearly changed her mind when the doctors decided to euthanise her, was sedated without her knowledge and then had to be restrained physically when the lethal medication was given. For dementia specialists around the world this was seen as a barbaric act but even more troubling was the acquiescence of Dutch society, the medical profession and courts in supporting the actions of the doctor.

To those outside the Netherlands, Belgium and Luxembourg this erosion of the fabric of respect and care for someone living with dementia was a logical outcome of their adoption of assisted suicide/euthanasia as a response to perceptions of present and future suffering instead of therapeutic approaches, and has important implications for Ireland at a time when similar measures are being contemplated in a Private Member’s Bill.

At the heart of the movement seems to be misperceptions of care processes and pathways, failure to recognise the drivers (and conversely corroders) of care, compassion and communication, an artificial separation of two forms of suicide into one which is undesirable and another desirable, a misinterpretation of dignity, and a vision of autonomy that has not factored in our relational nature and the impact of any individual’s actions on those around them.

These misperceptions are also alive and unfortunately unchallenged in the mainstream media and public perception. In medical education we often use popular cinema as a lens for viewing the sociocultural framing of health and healthcare: there was a notable lack of concern expressed by either the media or the public over the deeply troubling euthanasia of the young paralysed boxer by her guilt-ridden coach in Clint Eastwood’s 2004 movie Million Dollar Baby. Her pressure sores, as well as an infected leg which led to amputation, were indicators of sub-standard care by modern standards, she clearly had a severe untreated depression and unresolved family strife, and no effort was made to provide a more domestic and personalised environment in her “care” facility.

Our response to poor care should be to right it through a sympathetic and therapeutic approach: killing or hastening the death of the person suffering from the poor care not only harms them but fails to tackle the root causes of the suffering. In addition we need to transmit the almost universal experience of doctors of how patients respond in much more adaptive and creative ways to the present reality of illness and challenges than how they had imagined and feared the experience as a future eventuality.

The discourse of those supporting the proposed Dying with Dignity Bill in Ireland shows a lack of awareness of these dangers inherent in subverting the care impulse into one which cuts life and possibilities short. Unsurprisingly, the Royal College of Physicians in Ireland, representing a wide range of specialities from the cradle to the grave including palliative care and geriatric medicine, has produced a position paper advocating for an emphasis on care and outlining the many reasons for turning away from assisted suicide as an apparent treatment.

It is hoped that politicians and the media will understand that this is a fundamental issue of human rights and solidarity and resist the temptation to portray this as adversarial combat between liberals and conservatives, or religion and secularism. This issue rises above and beyond these considerations, and we need to address the concerns of those supporting the Bill in terms of frameworks of care and support, responding to uncertainty and fears about future experiences, and converting the energy and campaigning focus from assisted dying to assisted living.