A costly shilling – Ernest Blythe and the old-age pension 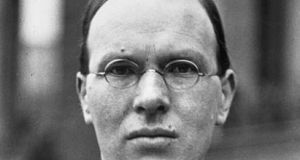 Ernest Blythe: cut the old-age pension by a shilling a week in his 1924 budget

One of the most “unlucky deeds” ever carried out by a minister for finance was when Ernest Blythe cut the old-age pension by one shilling per week in his 1924 budget.

The pay of national school teachers had earlier been reduced by 10 per cent and that of the Civic Guard by even more. But Blythe’s deduction of a shilling from the old age pension, although later restored, remained embedded in memory and contributed to the government’s eventual loss of office some years later.

Oliver St John Gogarty, who supported the proposal in the Senate, cynically acknowledged the link between the pension and votes when he referred to the pension as “the vote-catching device of an English politician”. The pension had been introduced by Lloyd George in 1908.

Following the general election in August 1923, the president of the Executive Council of the Free State, W T Cosgrave, appointed the 34-year old Ernest Blythe as minister for finance. Prior to that Cosgrave held the portfolio, following the death of Michael Collins.

Somewhat sternly, Joe Lee described Blythe as “a strong personality of narrow perspective . . . He was an Ulster Protestant”. By the time Blythe took up the reins, a campaign for retrenchment was already under way, strongly supported by the secretary of the Department of Finance, the Cambridge-educated Joseph Brennan.

When the current Minister for Finance Paschal Donohoe introduces his fourth budget in October, in the shadow of Covid and Brexit, he will face a deficit in the region of € 30billion. He may find a spark of hope in the fact that some of his predecessors overcame grim budgetary challenges in the past. Most recently Brian Lenihan had to deal with the consequences of the bank guarantee and the bailout; in the 1970s Richie Ryan was confronted with the oil crises. But no one had to deal with a scenario comparable to that which faced Ernest Blythe which included the costs of rebuilding the country following from the War of Independence and the Civil War.

George Duncan, former professor of economics at Trinity College Dublin, alma mater of Paschal Donohoe, undertook an analysis of the first five budgets in the Irish Free State 1922-1927. This was published in the Economic Journal. Duncan’s analysis showed that by 1926-27 the State “had safely and successfully made ends meet”. But he concluded that there was a definite risk that the State might find itself financing its current expenditure out of borrowings. In fact the first national loan for £10 million had floated in 1923. It was fully subscribed, although no bank contributed.

Ernest Blythe continued to make ends meet but at a political price. Seán MacEntee from Fianna Fáil replaced Blythe as minister for finance in 1932 and Blythe lost his seat in the snap election of 1933. Shortly afterwards he became a director of the Abbey Theatre and was managing director of the theatre from 1941-1967.

When he was minister for finance, Blythe had arranged for a small subsidy to be paid to the Abbey, making the Abbey one of the first state-subsidised theatres in the world. In 1945 Blythe initiated a series of Christmas pantomimes in Irish. The opening night of the inaugural pantomime, Muireann agus an Prionsa, was attended by the president, Seán T Ó Ceallaigh, and the taoiseach, Éamon de Valera.

Blythe was the driving force behind the building of the new Abbey Theatre, following the fire which destroyed the old theatre in 1951. A future minister for finance, Charles Haughey, then parliamentary secretary in the Department of Justice, displayed his interest in the arts when he assisted in obtaining a grant of £250,000 for building the new Abbey from a fund with the intriguing title the “Funds of Suitors”, which was under the care of the Department of Justice.

Paschal Donohoe will not follow Blythe’s path and cut a shilling or equivalent from the old age pension. Although the causes are different, the Minister faces budgetary challenges on a scale that Blythe would understand. Expectations continue to rise for public services to levels unimagined in Blythe’s world. At the same time clouds are gathering over our corporate tax regime; the corporate tax take would just about service the interest on the national debt. Our financial contribution to the EU will probably increase following Brexit.

Making ends meet will be difficult.