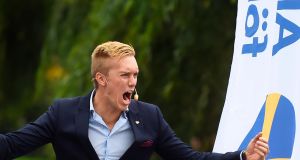 Earlier this summer the government of Sweden sent a booklet to every household advising them on how to prepare for war. “If Sweden is attacked by another country, we will never give up,” it read, striking as Churchillian a note as possible in earnest, peace-loving Scandinavia.

The booklet drew some scorn, since it seemed out of sync with our image of Sweden as a beacon of common sense. And yet, as it heads to a general election on Sunday, Sweden is indeed in a kind of war - though not necessarily with the unidentified enemy of the booklet.

For the past few months, the country has been bombarded on social media by an avalanche of trolls, fake news, misinformation and alternative facts - outright lies, in other words - as polling day approaches.

The origin of these attacks is obscure, though Sweden’s cyber police have identified thousands of social media “bots”, probably located abroad. But the trolls have a single theme - that Sweden is finished, falling apart, doomed. It is crime-ridden, and overrun by illegal immigrants. Its cities are no-go areas for police, and rape is at epidemic levels.

All of these claims are false, or misrepresent basic facts, and are contradicted by evidence, as the Swedish government and media have gone to great lengths to show. Yet the narrative the torrent of abuse has inspired, of Sweden as a nation in a deep crisis, has fed into the election campaign and aided the rise of a far-right party called the Sweden Democrats.

The Sweden Democrats are the latest addition to the ranks of Europe’s resurgent hard right. They share its conservative-nationalist hostility to immigrants and the European Union, and an ideology tinged with scapegoating and anti-semitism. One of the party’s founders was a Nazi, and others had ties to neo-fascist groups. That makes the party’s rise to mainstream status as sinister as that of the Alternative for Germany faction that was the big winner in the German election last year.

Sweden’s traditional political establishment may indeed be ripe for a challenge. The centre-left Social Democrats, which have been the largest party after every election for a century, are running out of ideas, support, and credibility. The Moderate party, on the centre-right, is faring little better. As the centre shrinks, there is a vacuum to be filled. The shock, in social-democratic, progressive Sweden, is that it is being filled by the far right.

Opinion polls suggest the Sweden Democrats could be the second-biggest party after Sunday’s election, which would give them a casting vote on the new government - and perhaps even a role in it. The Sweden that emerges from the general election may not be the Sweden we think we know.

Sweden has serious problems that need to be addressed. Though the economy is doing well - it largely escaped the austerity and financial crisis that hit other European countries in the past decade - its generous welfare state is creaking. The system is perceived by many Swedes to be no longer fair, because it offers seemingly ever less to locals, and seemingly ever more to immigrants.

Sweden accepts more immigrants, proportionately, than any other country. Many of them are banished to isolated suburbs - as happens in French cities. Unemployment is higher among immigrants than among locals, and educational achievement is lower. Integration seems to be stalled.

There has been a rise in mindless anti-social behaviour, such as the wave of car burnings in recent weeks. There is a rise in murders and other crimes. Still, Sweden is by international standards a peaceful society with a very low crime rate. Yet in response to its perceived social ills, a growing number of Swedes now seem prepared to vote for a party of the far right.

One of the great liberal qualities is a sense of proportion - that problems can be fixed and may not be as bad as one thinks. The first aim of Europe’s populists and demagogues is to discredit that very quality. Your problem is extreme, the argument goes, so our solution must also be extreme.

This happened, above all, in Britain, where voters were persuaded to abandon all sense of proportion to vote to leave the EU. The most pernicious slogan of the Brexit campaign was “We want our country back”. The idea that Britain had been “stolen” by an unaccountable foreign elite is preposterous. Yet many Britons believed it, and set aside traditional British common sense in the 2016 referendum.

Some variant of that bogus we-want-our-country-back narrative has taken hold in Italy, America, Hungary, and even Germany. Now a growing number of Swedish voters appear to be in its grip, in response to the message that the country’s widely admired model of equality and fairness is broken.

Yet the peddlers of that message are a political movement which offers nothing except the scapegoating of immigrants and the untenable, catch-all argument that the country is in “crisis”. If they embrace the Sweden Democrats on Sunday, Swedish voters will deal a grievous blow to their country’s progressive and liberal credentials, and to its image as a society to be emulated. The losers will be not just themselves, but the vital centre of European politics.

The people with the moral right to demand their country back - because they have really lost it - are Syrian and Rohingya refugees. If western societies refuse to acknowledge that fact, then they truly have lost all sense of proportion.