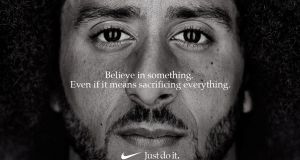 In less than 24 hours after announcing Colin Kaepernick as the face of their new marketing campaign, the multinational sportswear company, Nike, received more than $43 million worth of media exposure - the vast majority of it positive.

Kaepernick, an American footballer, ignited a controversial national debate when two years ago at a football match he refused to stand for the customary playing of the U.S. national anthem - instead he knelt down on one knee as a protest against racial injustice in the country.

The reaction to Kaepernick broke along traditional liberal and conservative lines - the former applauded him using his profile to highlight the disproportionate amount of black men being shot dead by police officers in the U.S; the latter deemed him to be “a disgrace” and “unpatriotic”. Donald Trump called for him to be sacked from his job for “disrespecting” the national anthem.

Nike, well aware that Kaepernick is a political lightning rod, made a bold corporate move by signing up the American footballer. They took a side. The company would have factored in some negative response - witness the amount of people ceremoniously burning their Nike sports clothes and calling for a boycott of the company in the wake of the announcement.

But Nike would also have factored in that the Kaepernick campaign would appeal to the growing millennial market segment and that - as has transpired - they would be rewarded by global media coverage for their initiative.

As a billion dollar corporate behemoth, fixated on their stock price and bottom line, Nike would also have been aware of the transformative effects of what is known as “woke-washing”.

As in “green-washing” - the deceptive use by corporations to promote the perception that their products are environmentally friendly, this new marketing spin cycle of woke-washing sees corporations eager to tell us about their progressive values as part of their advertising pitch.

But you’re not supposed to call it woke-washing - it’s pejorative. “Compassionate Capitalism” has a softer, fluffier feel to it.

Last month (August) the gambling company Paddy Power sent an empty double decker bus to participate in Brighton’s Gay Pride march, saying it was “the official bus of gay professional footballers”. The gambling company said they were making a statement about the fact that none of the top 500 Premier League footballers were openly gay and the bus was to “encourage gay players to step up and come out”.

Paddy Power would not previously have been known for their championing of and commitment to the LGBT community. The action was condemned as a “stunt” by a leading Gay Rights grouping.

It did though display how eager corporations are now to woke-wash their image - to appropriate social justice concerns as part of their marketing strategy.

Effective woke-washing needs the gentlest of touches. The soft drinks company Pepsi had to scrap an expensive advertising campaign last year and issue a full apology after an advertisement of theirs was roundly condemned for trivialising the Black Lives Matter political campaign.

In the old money an advertisement was defined as “a visual form of marketing communication to promote or sell a product”, however Pepsi said in their apology “we were trying to promote a global message of unity, peace and understanding”. This noble aspiration - and indeed the elimination of racial discord - would be achieved by buying a can of Pepsi’s sugar infused water.

The beer company Heineken are now all about the healing powers of “unity, peace and understanding” too.

A recent Heineken ad featured a member of the alt-right sitting down to debate political issues with a black feminist. Not to spoil the ending but it transpires that if you sip from a bottle of refreshing and competitively priced Heineken beer while discussing your political differences with someone, the world becomes a better, kinder place.

It can get absurd: as pointed out in Current Affairs magazine, the Northrop Grumman company who make Intercontinental Ballistic Missiles among other “services and solutions”, boast on their website that they observe seven different Pride and Heritage months and how they have contracts with minority-owned businesses that supply them with drone parts.

It must be some consolation to those killed by Northrop Grumman’s products that at least the company who made the missile “celebrate racial and gender diversity in the workplace”.

A similar form of disjuncture exists with Google, Amazon, Facebook, Apple and Starbucks - all are on point when it comes to public declarations of support for gender and racial diversity, for inclusivity, for equality.

They can all tick off a full Social Justice Bingo card except for the big, important box marked Tax Justice.

Words are cheap, paying an equitable amount of tax on your massive corporate profits is expensive.

Coincidentally or not, Nike’s Kaepernick marketing campaign comes at a time when the company is batting off allegations from the United Students Against Sweatshops grouping about the employment conditions in Nike factories in developing countries.

Ironically, those conservative critics of Nike using Colin Kaepernick are now the ones highlighting the company’s admitted past use of sweatshop working conditions and poor labour relations and drawing attention to the newer allegations.

Also, in April this year the New York Times published a damning report on the company which opened with the line “For too many women, life inside Nike had turned toxic” and detailed how staff outings ended up at strip clubs, reported how a boss at the company tried to forcibly kiss a female subordinate and how women at the company were “made to feel marginalised and were largely excluded from crucial divisions”.

Woke-washing wouldn’t rinse out the stains, instead the company went straight for the commodity activism play - the belief that social change can be achieved through patterns of consumption.

Colin Kaepernick’s initial protest was about racial injustice - a centuries old story of discrimination and prejudice from the abolition of slavery to the Jim Crow laws via lynchings and beatings to the march from Selma to Montgomery and on to the Civil Rights and Voting Rights acts.

Nike have compressed all this into an advertising image being used to sell €150 sneakers.

A corporate swoosh tick that erases history and maximises profit.