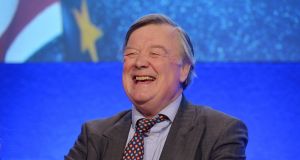 Former UK chancellor Ken Clarke has strongly criticised most of the main contenders in the Conservative leadership race.

Speaking to former foreign secretary Malcolm Rifkind while still wearing a live Sky News microphone at the broadcaster’s Westminster studio, Mr Clarke described the situation as a “fiasco”, and said he would probably end up voting for Ms May, after giving support to work and pensions secretary Stephen Crabb in the early stages of the contest.

Mr Clarke told Mr Rifkind: “Theresa’s a bloody difficult woman, but you and I worked for Margaret Thatcher. ”

The senior Conservative also said: “I get on all right with her . . . and she is good. She’s been at the Home Office far too long, so I only know in detail what her views are on the Home Office.

“She doesn’t know much about foreign affairs.”

He said of Ms Leadsom: “She’s not one of the mindless, tiny band of lunatics, who think we can have a sort of glorious economic future outside the single market.

“So long as she understands that she is not to deliver on some of the extremely stupid things that she’s been saying.”

Mr Clarke replied: “I don’t think the membership will vote for Gove. I remember being in a discussion once about something we should do in somewhere like Syria or Iraq, and he was so wild, I remember exchanging looks with [Conservative politician] Liam Fox. who’s much more right wing than me, we were exchanging views, and Liam was raising eyebrows. I think with Michael as prime minister we’d go to war with at least three countries at once.”

“He did us all a favour by getting rid of Boris. The idea of Boris as prime minister is ridiculous,” Mr Clarke said.

“I don’t think either Andrea Leadsom or Boris Johnson actually are in favour of leaving the European Union. It was the obvious thing that the voters, ie: Conservative Party members, were going to vote Leave.”

Mr Rifkind replied: “I don’t think they cared very much either way.”

Mr Clarke said he thought he would “wind up voting Theresa”, but would support Mr Crabb in the initial stages, even though he does not know what the work and pensions secretary stands for on many issues.