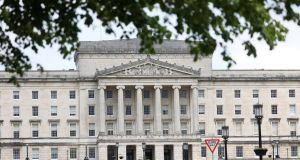 Parliament Buildings in Stormont, Belfast. ‘Most unionists will be quietly relieved that, despite everything, Northern Ireland is still in the UK.’ File photograph: Peter Morrison/PA Wire

Unionism begins 2021 – Northern Ireland’s centenary – with a problem: a problem built upon an irony. The main plank of the pro-union argument has been Northern Ireland’s constitutional position as an integral member of the UK. Fair enough, there was always an air of being a “place apart” within the construct, but with enough evidence pointing to the fact that the differences between the North and Britain were mostly cosmetic.

No more. The Northern Ireland Protocol, agreed by Boris Johnson last year (and reaffirmed in December), means the North remains in line with the single market and customs union when the rest of the UK leaves. This necessitates checks on goods crossing the Irish Sea and some customs infrastructure at northern ports; and treating the North so differently from Britain inevitably raises questions about the fragility and future of the UK, whose present form, dating from 1921, is being celebrated next year.

That celebration is difficult for unionism: a difficulty heaped upon it by Boris Johnson, the man cheered at a DUP conference when he pledged to save the North from semi-colonial status, then was later propped up by the DUP when he became prime minister. Yet it is Johnson who has shifted the North from its “place apart” status into the much more precarious position of becoming the constitutional equivalent of a granny flat. The North is now, arguably, in a weaker constitutional position than at any time since 1921, pushed there by the actions of the very man in whom the DUP invested so much trust.

The DUP’s problem – which is a problem for all of unionism – has been noticed by nationalists and republicans in the North, as well as by the Irish Government. That explains why the SDLP, Sinn Féin and prominent voices within civic nationalism and academia in the North have refused to participate in the Centenary Forum to mark the formation of Northern Ireland. I can understand why they don’t want to “celebrate” the event, but I initially found it strange they’d miss the chance to have an input into the debate, particularly about the huge changes after the Stormont parliament was closed in 1972.

I suspect their absence is rooted in a belief – common across nationalism – that the UK is hurtling towards inevitable dissolution, starting with Scotland, and followed by a successful Border poll in the North. In other words, they don’t think it’s worth talking to unionists about the union because they think the union is doomed. And one of the reasons they believe the Northern Irish wing of the union is doomed is precisely because the Northern Ireland Protocol has placed the North outside the constitutional ambit of Great Britain.

All of which means unionists must face the reality that a Border poll, while not inevitable, is certainly more likely than not. Both Leo Varadkar and Micheál Martin take the line that now is not the time for a poll, yet in the question-and-answer session after his recent speech about the Coalition’s Shared Island approach, Martin mentioned a couple of times about not wanting to consider such a poll for at least five years. Five years is the blink of an eye in political terms. Civic nationalism in the North, along with Sinn Féin and the SDLP, is focusing a lot of attention on unity right now. And while the Irish Government doesn’t have the issue at the top of its agenda, I think it would be remarkably complacent of unionism to assume that work isn’t being done in the background. My assumption, for what it’s worth, is that the Irish Government is now proceeding on the basis that a combination of circumstances will make the demand for a poll irresistible.

The five years mentioned by Martin, along with Mary Lou McDonald’s recent claim of Irish unity by 2030, should represent breathing space for unionists: time to think about a common approach and strategy and prepare a coherent, united pro-union case for when the Border poll comes. A number of unionists, including Peter Robinson, have supported the creation of something like a council for the union (bringing together key players from across the large and diverse pro-union community), yet there is still nothing in place.

Hanging over all of this is Brexit. At this point no one can be certain how events will play out. It could be years until there is anything resembling a settled picture. Yet the next big electoral challenge in the North is the Assembly election due in May 2022 (although it could be pushed to 2023): the challenge for unionists is to regain the majority they lost in 2017; the challenge for Sinn Féin, to win the couple of seats required to hand them the keys to the First Minister’s office.

Who will win their challenge will probably be determined by how well Britain and Northern Ireland is faring politically, economically and constitutionally. Elections are due to the Scottish parliament in May 2021 and a significant victory for the SNP – which seems likely – will place huge pressure on Johnson to agree to a second independence referendum: the result of which is hugely important for Northern Ireland and local unionism.

So, all in all, 2021 looks like being the most important year for the North since 1921. Most unionists will be quietly relieved that, despite everything, Northern Ireland is still in the UK. But they also know nothing can be taken for granted. The pro-union celebratory case is going to be a hard one to make, and will depend on events and circumstances over which they have no control. What may worry them most, though, is a lack of evidence that the collective leadership of political and civic unionism is actually prepared to make, or capable of making, the arguments upon which Northern Ireland’s future will depend.