Search continues for tigers, lions, bears and wolves in the city of Tbilisi 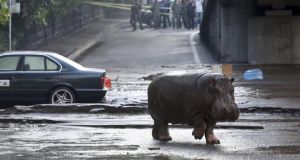 A hippopotamus walks across flooded street in Tbilisi in Georgia on Sunday. Photograph: Beso Gulashvili/Reuters 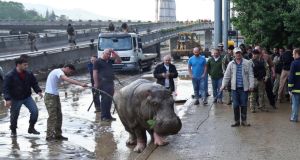 A hippopotamus walking on a flooded street in Tbilisi in Georgia on Sunday. Photograph: Beso Gulashvili/EPA/Georgian prime minister’s press service 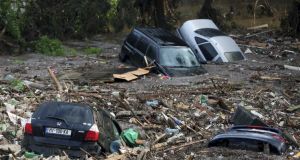 Cars are seen among debris at a flooded street in Tbilisi in Georgia on Sunday. Photograph: Beso Gulashvili/Reuters 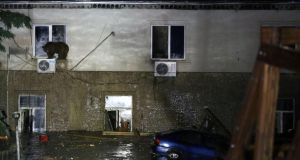 A bear, who escaped from the zoo, sits on the window of the second floor of a building on the flooded street in Tbilisi in Georgia on Sunday. Photograph: Beso Gulashvili/EPA/Georgian prime minister’s press service 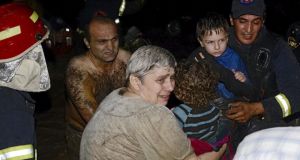 Local residents and rescuers evacuate a woman with children at a flooded street in Tbilisi, Georgia on Sunday. Photographs: Irakli Gedenidze/Reuters 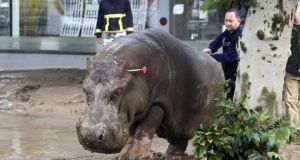 A man directs a hippopotamus after it was shot with a tranquiliser dart at a flooded street in Georgia. Photograph: Beso Gulashvili/Reuters 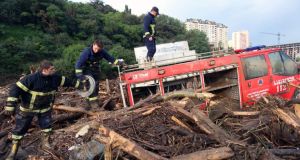 Tigers, lions, bears and wolves were among more than 30 animals that escaped from a zoo and onto the streets of Georgia’s capital Tbilisi during floods that killed at least 12 people.

Residents were advised to stay indoors until the animals could be captured.

Photographs showed a marksman shooting tranquilliser darts at a hippopotamus walking past shops on a mud-soaked street.

Local news agencies later reported more than half the animals had been returned to the zoo. Some were killed by police, including a rare breed of white lion cub and six wolves roaming the grounds of a nearby children’s hospital. “Our favorite lion, Shumba, was just killed by the emergency forces,” said Mzia Sharashidze, a spokeswoman for the city zoo. “We don’t know how many animals are missing. The zoo is still flooded.”

Three zoo workers died, including a woman who was trying to save lions and tigers. Several weeks ago she had lost her arm when a tiger attacked her, according to the reports. Her husband also died in the flooding.

There were no immediate reports that any of the fatalities were due to animal attacks.

Heavy rains turned the Vere river that flows through Tbilisi into a torrent that washed away buildings, roads and cars. “Dozens of families remain homeless as their houses were destroyed or damaged in the capital,” deputy mayor Irakly Lekvinadze told reporters.

At least 24 people were still missing and 37 were taken to hospital with injuries, Interior Minister Vakhtang Gomelauri told an emergency government meeting.

Monday was declared a day of national mourning.

The estimated damage was up to 40 million lari (€18 million), according to the Finance Ministry, and government officials were in touch with international donors to discuss aid.

About 1.1 million people live in the capital.

The head of the Georgian Orthodox Church, Patriarch Ilia II, was quoted by the Interfax news agency as telling a Sunday Mass that Georgia’s former Communist rulers could be seen as involved in the disaster.

“When Communists came to us in this country, they ordered that all crosses and bells of the churches be melted down and the money used to build the zoo,” he said. “The sin will not go without punishment. I am very sorry that Georgians fell so that a zoo was built at the expense of destroyed churches.”