Yellowstone bison calf put down after tourists put it in car

Visitors decided to drive newborn calf to park facility, leading mother of calf to reject it 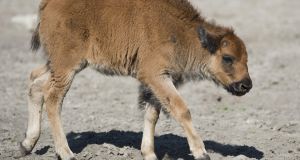 The newborn bison calf had to be euthanised because its mother had rejected it as a result of ‘interference by people,’ officials said. Photograph: AFP/Getty Images

Yellowstone National Park managers on Monday warned visitors to leave wildlife alone after two tourists put a newborn bison calf in their car, touching off a string of events that led to the animal’s death.

The visitors from outside the United States came across the baby bison alone last week and decided to drive the calf to a park facility, unaware that interference with newborn animals could cause their mothers to reject them, park managers said in a statement.

Yellowstone rangers repeatedly tried to reunite the calf with the herd but those efforts failed. Ultimately, the abandoned calf was euthanised because it repeatedly approached people and cars along the roadway, raising safety concerns, officials said.

Almost 5,000 bison, also known as buffalo, freely roam throughout Yellowstone and are a top draw for the millions of American and international tourists who annually flock to the park that spans parts of Wyoming, Montana and Idaho.

“Approaching wild animals can drastically affect their well-being and, in this case, their survival,” a Yellowstone spokeswoman said, referring to the incident involving the bison calf.

The visitors who put the bison calf into the car were given a citation, rangers said.

The incident last week was the latest in what officials described as “inappropriate, dangerous and illegal behaviour with wildlife” that is placing animals and humans at risk.

They pointed to a recent video that went viral showing a visitor within arm’s length of an adult bison near the park’s storied geyser, Old Faithful. A separate video featured visitors taking selfies with bison “at extremely unsafe and illegal distances,” the park said.

Bison, which can weigh as much as a ton, injure more Yellowstone visitors than any other creature in encounters mostly triggered by unwise human behaviour, officials said.

A Mississippi woman was hurt in July after trying to snap a selfie with a bison that charged and gored her. She was one of several visitors who were injured last year by one of the park’s bison after people got too close.

Tourists entering Yellowstone are warned to stay at least 25 meters away from bison and to give even wider berth to creatures such as bears and wolves.