Will Donald be Trump? Four things to watch for in first TV debate 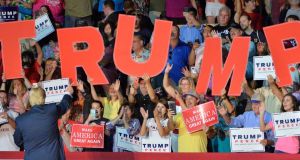 Will Trump be Trump?

The reality TV star’s freewheeling style and love of the insult allowed him to stand out in a packed field in the Republican debates – but in a TV head-to-head debate with the first woman to lead a major party into an election, this would not be presidential.

If Trump is provoked or beaten on policy detail by the wonkish Hillary Clinton, will he revert to type and say something outrageous to grab the headlines?

Can Clinton prosecute the case against Trump?

In this court of public opinion, the Democrat will for the first time directly argue her case against Trump: his incitement of racism, bigotry, misogyny and xenophobia; his dubious track record in business; his failure to release his tax returns; his conspiracy theories about Barack Obama’s birthplace. Can she defend herself on her own controversies – her emails, the Clinton Foundation, the Benghazi attacks – and still convict Trump as being unfit for the Oval Office?

How quickly will the attacks come?

In the test to be the most calm and collected, each candidate will attempt to rattle the other and provoke an over-emotional reaction to raise questions about their temperament to be president. After the handshake, all eyes will be on how soon into the debate they will start dangling the bait.

Will the debate moderator call out Trump’s lies?

NBC host Matt Lauer drew fire for not challenging Trump’s claim in a televised interview earlier this month that he opposed the war in Iraq. The Republican’s loose relationship with the truth heaps pressure on Lauer’s colleague Lester Holt to be ready to check facts and call out his whoppers.