7.6-metre sign erected in 1959 is one of most photographed landmarks in casino city 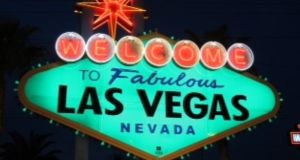 Las Vegas celebrated St Patrick’s Day with a couple of parades and an abundance of ‘Happy St Paddy’s Day’ T-shirts and badges - but the centrepiece of the celebrations was the greening of its best-known symbol, the Welcome to Fabulous Las Vegas sign at the southern end of the Strip.

The 7.6-metre-tall sign, designed by Betty Willis and erected in 1959, is one of the most photographed landmarks in the city, drawing daily queues of visitors looking for the ubiquitous shot. This is the third year that it has gone green and its importance was emphasised by Caroline Coyle, the Irish-born vice-president of brand strategy for the Las Vegas Convention and Visitors’ Bureau, who said March was one of the busiest times of the year for tourism.

Las Vegas welcomes over 41 million visitors a year, making it the third-most popular tourist destination in the US, after New York City and Orlando.

Clark County commissioner Lawrence Weekly, wearing a St Patrick’s Day medallion for the occasion, enthusiastically endorsed the greening ceremony, which was also attended by local TV crews, showgirls in green-plumed headpieces, a group of Irish dancers from the Sharon Lynn Celtic Crown School and a hundred or so spectators flecked in green.

Mr Weekly referred to Ireland’s “vital role” in the United States, “so we’re excited to roll out the green carpet and celebrate [Irish] culture and heritage”.

But culture and heritage are fluid commodities in Las Vegas, so one of the parades was a bagpipe march through the casino floor of the New York New York hotel as employees gave out Mardi Gras-style beaded necklaces to the couple of hundred or so spectators, most of whom wore green.

They hooped and hollered as the bagpipers made their way across the floor to the Nine Fine Irishmen pub, where the party continued for the remainder of the day.

A more traditional parade was held in the Fremont Street area of Downtown, where firefighters and police officers from all over the country were led by grand marshall Theresa Murphy, the Honorary Consul of Ireland for Nevada.

Following the parade, some of the participants took part in the Firefighter Fun Challenge, a charity march that involved the wearing of kilts with nothing underneath.

For Ms Murphy, the fun has a more serious side, as the annual parade was initiated after the events of September 11th, 2001 to offer firefighters, police officers and first responders the opportunity to “get a break and get away from things...and that it mightn’t be a big parade, but it certainly is an emotional one”.