Activists confront institutions about profiting from the climate crisis 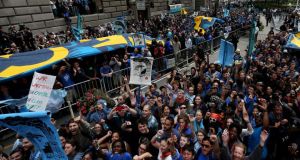 Just a day after the huge People’s Climate March in Manhattan, which drew at least 300,000 participants, more radical activists “flooded” Wall Street yesterday to call on banks to stop funding oil, coal and other fossil fuels.

Some 2,000 protesters, mostly dressed in blue, assembled in Battery Park at the southern tip of Manhattan, where they were addressed by militant author Naomi Klein and others before marching to the New York Stock Exchange.

There they staged a noisy “mass sit-in” that recalled the long-running Occupy Wall Street protest at the height of the financial crisis, but with a more topical 90-metre-long banner that read “Capitalism = Climate Chaos. Flood Wall Street.”

They pledged to “shut down the institutions that are profiting from the climate crisis” and confront what they see as its root cause, “an economic system based on exploiting frontline communities, workers, and natural resources”.

Spokesman Michael Premo blamed the fossil-fuel industry for “runaway climate change and extreme weather events, such as the extreme flooding that we saw here in New York City with Hurricane Sandy”, a disaster that cost the city billions of dollars.

According to Occupy Denver veteran Eric Verlo, who had travelled from Colorado to be at the protest, it was “about trying to take the people, the activists that have come to town, and try to put them in the way of ‘business-as-usual’ for Wall Street”.

But because their “collective act of non-violent civil disobedience” would almost inevitably lead to arrests by New York police, the organisers said they had already set up a bail fund “for everyone who will leave Wall Street in plastic zip-tie handcuffs”.

Toronto-based Klein, author of No Logo and other polemical bestsellers, recently published a new book, This Changes Everything: Capitalism vs the Climate, documenting the role of right-wing think tanks in financing climate-change denial.