Nasa disputes that the spacecraft has finally journeyed into interstellar space 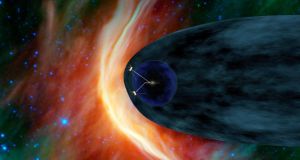 Artist’s concept showing Nasa’s twin Voyager spacecraft exploring a turbulent region of space known as the heliosheath, the outer shell of the bubble of charged particles around the sun. Photograph: Nasa


There is no dispute that the little spacecraft Voyager 1 has boldly gone where no man-made object has gone before, but has it left our solar system?

That contention was made yesterday in a paper published in the little-known Geophysical Research Letters , the journal of the American Geophysical Union (AGU).

Prof Bill Webber and Dr Frank McDonald from New Mexico State University maintain that on August 25th last year Voyager 1 went from the sun’s influence to that of interstellar space, the vast void between our star and the next.

In their paper the scientists say that on the date in question there was a dramatic change when cosmic rays trapped in the outer heliosphere (the area controlled by the sun) dropped to 1 per cent of previous levels.

At the same time galactic cosmic rays – cosmic radiation from outside the solar system – spiked to levels not seen since Voyager ’s launch, with intensities as much as doubling.

“Within just a few days, the heliospheric intensity of trapped radiation decreased, and the cosmic ray intensity went up, as you would expect if it exited the heliosphere,” wrote Prof Webber.

The findings were summed up in the headline of a press release from the GRL which grabbed worldwide attention: “ Voyager 1 has left the solar system, sudden changes in cosmic rays indicate”.

Nasa, however, has taken issue with the claim. Though it acknowledges the nature of particles encountered by Voyager 1 indicate that a change has happened, it says there is still evidence it is under the influence of the sun’s magnetic field.

Still, Voyager 1 will one day reach interstellar space and, in the next 40,000 years, will come within astronomic spitting distance of a star known as Gliese 445 (Gl 445), which is 17 light years away.

Voyager 1 is a marvel of 1970s technology. It was launched in 1977 with a computer power 7,000 times weaker than that of a modern-day smartphone, yet it is still working more than 35 years after launch.

‘Pale blue dot’
The craft is now about 18 billion kilometres from home. Along with its sister ship Voyager 2 , it has expanded our knowledge of the solar system.

Voyager 1 ’s most memorable moment was in 1990, when it sent a snapshot of the solar system including Earth from a distance of six billion kilometres.

The tiny pixellated view of Earth, which had to be blown up to be seen on photograph, was nicknamed the ‘pale blue dot’ in a famous lecture by the astronomer Carl Sagan.