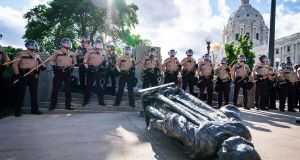 Minnesota State Troopers surrounded the statue of Christopher Columbus after it was toppled in Minnesota. Photograph: Leila Navidi/Star Tribune via AP

US protesters have pulled down a statute of Christopher Columbus outside the Minnesota State Capitol.

A rope was thrown around the 10ft bronze statue and the demonstrators then pulled the figure off its stone pedestal.

The protesters, including Dakota and Ojibwe Indians, said they consider Columbus as a symbol of genocide against Native Americans.

They said they had tried many times to remove it through the political process but without success.

State Patrol troopers in helmets, who provide security in the Capitol complex, stood by at a distance but did not try to stop the protesters, who celebrated afterwards with Native American singing and drumming.

The troopers eventually formed a line to protect the toppled statue so it could be taken away.

In Boston and Richmond, statues of Christopher Columbus were also pulled down as protesters angered by the death of George Floyd have continued to direct some of their frustration toward monuments, including Confederate statues, that they consider to be symbols of racism.

It comes as Donald Trump says his administration will “not even consider” changing the name of any of the 10 US Army bases that are named for Confederate Army officers as anti-racism protests continue across the country.

Hours after the US leader made the comments, demonstrators forcibly removed a statue of Confederate former president Jefferson Davis on the popular Monument Avenue in Richmond, Virginia.

Local media reported the statue was left on the ground in the middle of an intersection, while 80 miles away in Portsmouth a marching band played as a crowd beheaded then pulled down four statues that were part of a Confederate monument.

It comes days after US defence secretary Mark Esper indicated he was open to discussing such changes and in the wake of the funeral of black man George Floyd, whose death prompted calls for changes to police practices and an end to racial prejudices.

Mr Trump tweeted: “These Monumental and very Powerful Bases have become part of a Great American Heritage, a history of Winning, Victory, and Freedom.

“The United States of America trained and deployed our HEROES on these Hallowed Grounds, and won two World Wars. Therefore, my Administration will not even consider the renaming of these Magnificent and Fabled Military Installations.”

Name changes have not been proposed by the army or the Pentagon, but Mr Esper and Army Secretary Ryan McCarthy on Monday told reported reporters that they were “open to a bipartisan discussion” of renaming bases such as Fort Bragg in North Carolina and Georgia’s Fort Benning.

Supporters of disassociating military bases from Confederate Army officers argue that they represent the racism and divisiveness of the Civil War era and glorify men who fought against the United States.

Mr Trump’s press secretary, Kayleigh McEnany, read his tweets to reporters in the White House briefing room, adding he is “fervently” opposed to changing the base names and believes that doing so would amount to “complete disrespect” for soldiers who trained there over the years.

It comes as the president’s most significant foe in Congress called for Confederate statues to be removed from the streets of the country’s capital.

House Speaker Nancy Pelosi said in a letter to a House-Senate committee with jurisdiction over the topic that such monuments “pay homage to hate, not heritage. They must be removed”.

Mrs Pelosi lacks the authority to order the removal of the 11 statues honouring Confederates, but is urging the little-noticed Joint Committee on the Library to vote to remove them.

Also on Wednesday, Mr Floyd’s brother challenged Congress to ensure George would not be just “another name” on a growing list of those killed during interactions with police.

Choking back tears, he said he wants to make sure that his brother, whom he called “Perry”, is “more than another face on a T-shirt. More than another name on a list that won’t stop growing”.

He directly challenged politicians to step up. “The people marching in the streets are telling you enough is enough. Be the leaders that this country, this world, needs. Do the right thing,” he said.

The hearing came as Amazon announced a one-year ban on supplying its facial recognition technology to police, to allow Congress time to come up with ways to regulate its use.

House judiciary committee chairman Jerrold Nadler started Wednesday’s session as Democrats review the Justice in Policing Act, a far-ranging package of proposals amid a national debate on policing and racial inequity in the United States.

Politicians were also hearing testimony from civil rights and law enforcement leaders at the congressional hearing on proposed changes to police practices and accountability after the Minnesota man’s death in police custody and the worldwide protests that followed.

Republicans are rushing to draft their own proposal but also criticising calls from activists across the country who want to “defund the police” — a catch-all term for reimagining law enforcement, but one that US president Donald Trump and his allies have seized on to portray Democrats as extreme.

For hours, witnesses described what one called a “lynching” over what happened to Mr Floyd on May 25th, and others placed his death alongside those of other African Americans that have created a tally becoming difficult for Congress to ignore.

Representative Karen Bass, the chairwoman of the Congressional Black Caucus, which is leading the legislative effort, said the proposed changes reflect a nation coming to grips with a history of racial injustice.

“This is about the kind of America we all want to see,” said Ms Bass.

The Democrats’ legislation would create a national database of police misconduct, ban police choke holds and loosen “qualified immunity” to make it easier for those injured to seek damages in lawsuits, among other changes.

The proposals do not go as far as some activists’ calls to defund police departments for other community services. They do, however, make available grant money for states to reimagine ways of policing.

Republicans as well as Democrats have called for a national registry of use-of-force incidents, so police officers cannot transfer between departments without public awareness of their records. – AP