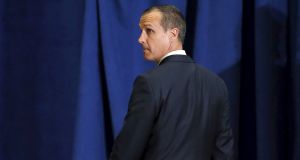 Corey Lewandowski, campaign manager for US Republican presidential candidate Donald Trump, at a rally in Wisconsin, the US. Photograph: Jim Young/Reuters

US prosecutors have dropped a battery charge against Donald Trump’s presidential campaign manager, Corey Lewandowski, saying there was insufficient evidence to convict him.

Mr Lewandowski (42) was charged by police with simple battery after a reporter, Michelle Fields, of conservative news outlet Breitbart, accused him of grabbing her arm as she tried to asked Mr Trump a question.

The event took place at a campaign event hosted by the billionaire at Trump International Golf Club in Jupiter, one of his golf resorts in Florida, after the primary elections in four states on March 8th.

She later released a photograph showing bruises on her arm which she claimed were from Mr Lewandowski pulling her back from the businessman.

David Aronberg, state attorney for Palm Beach County, told a press conference that police were entitled to charge the campaign worker but attorneys had to meet a higher standard in order to prosecute the case.

“Although the facts support the allegation that Mr Lewandowski did grab Ms Fields’s arm against her will, Mr Lewandowski has a reasonable hypothesis of innocence,” Mr Aronberg told reporters.

Adrienne Ellis, an assistant attorney who investigated the case, said their decision came down to Fields leaving an assigned press area and entering the secret service “protective bubble” around the candidate.

“We’re not charging him because he was reacting to what he perceived as a potential threat,” she said.

He said that it was “not uncommon” for a candidate’s staff to be “given apparent authority to assist in clearing a safe pathway, sharing some responsibility for the safety and wellbeing of the candidate when agents are otherwise occupied and the ‘protective bubble’ is compromised.”

In another moment of controversy, this time in the Democratic presidential race, a speaker at a rally for candidate Bernie Sanders in New York City on Wednesday night apologised for telling the crowd the country needed to stop electing “corporate Democratic whores” and elect “Bernie-crats”.