Trump talks of ‘American dream’ as rallies persist amid criticism 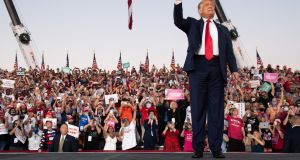 Donald Trump vowed on Tuesday to continue holding large-scale campaign rallies despite his recent coronavirus diagnosis, as virus expert Dr Anthony Fauci warned that the US president was “asking for trouble”.

Trump, who was due to hold a rally on Tuesday night in Pennsylvania, was widely criticised for hosting a large campaign event in Florida on Monday night which saw thousands of supporters cram into an airport hangar near Orlando to hear the president.

Addressing his supporters in his first appearance outside Washington since his release from hospital, Trump declared he was “standing up for the American worker, the American family and the American dream”.

On coronavirus, he said he wanted to congratulate Republican governor Ron DeSantis, who was in the crowd without a mask, for opening-up Florida. “You’re open and open for business and doing great,” he said, adding: “the cure cannot be worse” than the virus.

Referencing his own experience with Covid-19, he said: “I went through it. Now they say I’m immune. I feel so powerful, I’ll walk into that audience. I’ll walk in there and kiss everyone in the audience. I’ll kiss the guys and the beautiful women . . . I’ll just give you a big fat kiss.”

Mr Trump’s hour-long speech was one of several campaign events he is scheduled to hold this week, including a second event in Florida on Thursday.

Democratic candidate Joe Biden also visited the state on Tuesday, where he outlined his policies on healthcare for over-65s – a key constituency in the battleground state.

Criticising his rival’s healthcare policy, he noted that the Trump administration had joined a lawsuit seeking to overturn the Affordable Care Act, also known as Obamacare. Trump, he said, “is beholden to the health insurance companies and the pharmaceutical companies”.

Referring to a Trump proposal to mail older people a $200 health payment card in the coming weeks, Biden said the president was “going to raid Medicaid trust fund to pay for this, which seniors have already paid for by paying money into”. “It’s dishonest, it’s reckless, it doesn’t actually help anybody,” he said.

He also stated that the president “has tried for almost four years to lower drug prices, but he hasn’t done a single thing to do it”.

As both candidates intensified their campaigning ahead of the November 3rd election, Republican senator Mitt Romney issued a statement decrying the state of US political discourse, calling on political leaders to “lower the heat”.

US politics had become “a vile, vituperative, hate-filled morass that is unbecoming of any free nation – let alone the birthplace of modern democracy”, the former Republican presidential candidate said.

He was particularly critical of Trump, singling out his behaviour in his statement: “The president calls the Democratic vice-presidential candidate ‘a monster’. He calls for the justice department to put the prior president in jail; he attacks the governor of Michigan on the very day a plot is discovered to kidnap her,” he said, though he also referenced House of Representatives speaker Nancy Pelosi’s decision to rip-up the president’s speech at the state of the union address in January.

Meanwhile, several states reported several issues with early voting. In Virginia, the state’s online voter registration system crashed on the final day to register to vote before the election. Officials said that a fibre optic cable had been cut, prompting the outage which also affected other government agencies.

In Texas, there were reports of voting machine malfunctions in the Houston area as the first day of early voting commenced. People waited in line for hours to cast their vote across the state which election officials said reflected a higher turnout than unusual. In Georgia on Monday, eight-hour voting queues were reported at some precincts.

Separately, further details of the alleged plot to kidnap Michigan governor Gretchen Whitmer emerged on Tuesday. An FBI agent told a court hearing that the men charged with the foiled crime had also planned to abduct Virginia governor Ralph Northam.