Transfer of power not discussed, says US security adviser 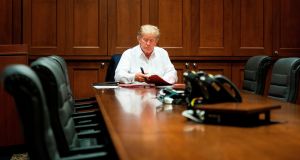 No discussion has taken place within the Trump administration about transferring power to vice-president Mike Pence, according to US national security adviser Robert O’Brien, following Donald Trump’s hospitalisation for coronavirus.

Speaking on Sunday, Mr O’Brien – who himself tested positive for Covid-19 in July – said a transfer of power had not been discussed, but that the administration was “prepared”.

“We have a great vice-president. We have a government that is steady,” Mr O’Brien said, later adding, “We have plans for everything.”

The last presidential transfer of power occurred in 2002 and 2007 when George W Bush temporarily handed over authority to vice-president Dick Cheney when he was anaesthetised for a colonoscopy.

An amendment was introduced to the constitution to clarify the lines of succession after the assassination of John F Kennedy in 1963.

The White House has said Mr Trump is continuing to work from the presidential suite at the Walter Reed Medical Center; he was photographed leafing through documents on Saturday. Mr Pence, who has tested negative for Covid-19, spent the weekend at the vice-presidential residence at the Naval Observatory in Washington.

Meanwhile, Trump campaign officials took to the airwaves on Sunday to defend the president’s handling of the coronavirus crisis. The virus has infected more than seven million Americans, including the president and first lady.

“I think too often he’s used the mask as a prop,” he said in an interview with ABC. “A mask is very important, but… he could be 20, 30 feet away from the nearest person and still have the mask on. That’s not going to change anything that’s out there. But, also, we’ve seen with Joe Biden, I mean, we can’t all just stay in our basement for the rest of our lives.”

Mr Trump has repeatedly questioned the need to wear masks as a way of mitigating the effects of the virus, directly criticising Mr Biden for excessive mask-wearing at last week’s first presidential debate.

Mr Cortes said the family had been tested, so they did not need to wear masks. When Mr Wallace asked if the first family and White House chief of staff felt that the rules did not apply to them, Mr Cortes replied: “We also believe in some element of individual choice. People were distanced, and they had been tested.”

As the president faced questions about why he travelled to a fundraiser in New Jersey on Thursday having just learned that aide Hope Hicks had tested positive, White House communications director Alyssa Farrah said it “was a decision made by White House operations because he wasn’t deemed to pose a threat”. She declined to specify when exactly Mr Trump was tested and received a positive result on Thursday.

According to an Ipsos-ABC poll on Sunday, 72 per cent of Americans believe Mr Trump did not take seriously enough the risk of contracting the virus, nor has he taken appropriate precautions.

While Mr Trump’s in-person campaign events have been cancelled as he remains in hospital, Mr Biden held election events over the weekend, including a visit to Michigan on Friday afternoon and a virtual “townhall” with the Amalgamated Transit Union on Saturday.

Officials have indicated that next Wednesday’s vice-presidential candidates debate between Mr Pence and Kamala Harris will go ahead as planned, though no decision has yet been made about the next presidential debate on October 15th, which is scheduled to take place in Miami.