US Election: Two sides in major charm offensive in Florida

Once again Florida could prove to be one of the most important states in the 2016 US Presidential election. In the previous 10 elections the state has voted for all but one president. 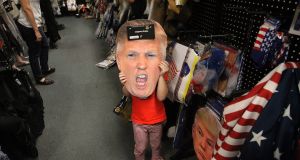 Key figures in the Clinton and Trump campaigns are sweeping across Florida this week as the two sides scramble to shore up support amid signs of a tightening race in the biggest battleground state.

A victory in Florida, with its prize of 29 electoral votes, is essential if Donald Trump is to reach the 270 needed to win the election. On Monday his running mate, Mike Pence, campaigned in three towns in closely contested central Florida and Trump himself is expected to return to the state before polling day.

Three of Hillary Clinton’s most high-profile advocates are also being dispatched to the state, with president Barack Obama, former president Bill Clinton and vice-president Joe Biden all due to speak at rallies in the state in the coming days. Ms Clinton, who visited a gay club and a black church in Fort Lauderdale on Sunday, is to return on Tuesday for events near Tampa, Orlando and Fort Lauderdale.

The late blitz on the Sunshine State by both sides reflects the importance of a diverse, populous state with large contingents of Hispanics, black people, students, retirees and working-class voters. A knife-edge result here decided the 2000 election, but while Mr Obama prevailed in the state in 2008 and 2012 and Clinton has led in opinion polls through October, a number of surveys in recent days point to a closing of the gap.

An NBC News/Wall Street Journal/Marist poll found that, in a four-way race, Clinton leads Trump by 45 per cent to 44 per cent. In a two-way race, the pair are tied at 46 per cent.

US Election: Clinton confident of victory 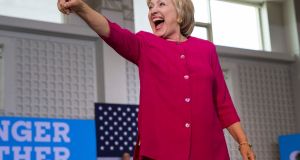 In general, the south of Florida, with its large urban centres and ethnic diversity, leans towards Democratic while Republicans have the edge in the north, whose political terrain more closely resembles that of the Deep South. Competition between the parties is most intense in the so-called I-4 corridor, named after the interstate motorway that spans several densely populated counties on its route from Orlando to Tampa.

For Michael Barnett, chairman of the Republican Party in Palm Beach County, where Democrats are in the majority, the priority is to keep Clinton’s winning percentage down so as to allow the north of the state to carry Trump over the line. “Mitt Romney four years ago won 41 per cent of the vote in Palm Beach,” he says. “We’re hoping Donald Trump can take 44 per cent. That would be a big victory.”

Barnett is convinced Trump can win the state. “We think Democrats are turned off by what they’ve been seeing in the news lately about Hillary and the re-opening of the email investigation by the FBI,” he says. The most resonant argument against a Clinton presidency, he has found, is that a Hillary administration would be “a continuation of the 1990s and the scandals that plagued the administration, that still plague the Clintons”. The possibility of Clinton being indicted while in office is one local Republicans have been stressing to voters.

The virtual absence of a Trump field operation in Florida means the nominee is dependent on local Republican Party activists to campaign and drive get-out-to-vote efforts. As of Monday, just over a quarter of registered Floridians had cast an early vote, and both Republicans and Democrats have taken encouragement from the figures so far.

By Monday morning, eight days before polling day, 3.7 million people had cast their vote in Florida, with Republicans accounting for 40.4 per cent of those and Democrats 40.2 per cent – a small margin in favour of the Republicans. However, figures show that in 2012 Democrats had the edge in early voting from this point onwards in that year’s cycle.

Independents and those registered with other parties have returned the remaining 18.5 per cent of early votes in Florida, though how those votes break down by candidate is unknown.

If Clinton is to emulate Obama’s achievement here in 2012, she must make sure her key voter groups turn out, in particular Latinos, African-Americans, women and young people. Therefore, this week’s campaign stops are aimed at specific constituencies. Vice-president “Scranton Joe” Biden will make the Clinton pitch to working-class voters while Obama will visit Jacksonville, a Republican city with a large African-American population.

“I don’t want to take it for granted, but I really want her to win Florida,” says Joshua Hanson, an 18-year-old student at Florida State University in Tallahassee. Hanson, who has already cast his vote for Clinton, is both a millennial and a Cuban-American – two groups that must turn out in big numbers for the Democrat if she is to win.

“Yes, I think she has some trustworthiness issues, but I wouldn’t say it affects my vote for her – not at all. Not when Donald Trump is the other person.”