US election: Hillary Clinton and Bernie Sanders claim win each 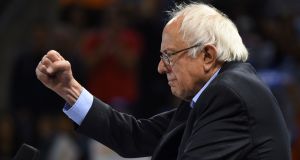 Democratic presidential candidate Bernie Sanders addressing a primary election night rally in Carson, California, on Tuesday. Mr Sanders scored a decisive victory over Hillary Clinton in the primary in Oregon, boosting his argument for keeping his underdog campaign alive through the conclusion of the primary process. Photograph: Robyn Beck/AFP/Getty Images

Democrat candidates Hillary Clinton and Bernie Sanders each picked up primary wins on Tuesday in yet another demonstration of how divided the party is in the drawn-out national race to win the nomination for November’s general election.

Mrs Clinton narrowly defeated Mr Sanders in Kentucky, a state where she was not expected to win. Mr Sanders bested her in Oregon, a state that played to his strengths.

In Kentucky, the two candidates will likely split the 55 delegates up for grabs. In Oregon, Mr Sanders will take only a handful more of the 61 delegates that were awarded.

Mrs Clinton’s sizeable lead in delegates means it is likely she will eventually be her party’s nominee, but she remains more than 100 delegates short of sealing the deal. The Democratic primary now hits a two-week lull, with the final set major contests, including California, scheduled for June 7th.

Mrs Clinton, who spent the past two days campaigning in Kentucky, would like to lock up the nomination and turn her attention to the November 8th general election and presumptive Republican nominee Donald Trump.

Mr Trump has begun to organise his general election campaign. On Tuesday, he signed a joint fundraising agreement with the Republican National Committee. The agreement allows him to raise $449,400 €399,000) from a single donor by splitting the funds between his campaign, the RNC and state Republican parties.

Mr Trump, who eschewed donations in the political system through the primary, has thus far insisted on mostly self-funding his campaign. The shift to a more traditional fundraising approach could draw the ire of some supporters.

Mr Trump, in an interview with Megyn Kelly that aired on Fox News on Tuesday night, said he did have regrets about his actions during the Republican primary process.

“I could have used different language in a couple of instances, but overall I’m happy with the outcome,” Mr Trump said.

Sanders supporters became angry when Nevada state party officials chose to end their convention and block efforts to award the US senator from Vermont more delegates than he initially won in the February caucus. Mrs Clinton won the caucus.

The Nevada incident was a warning about the potential for fireworks at July’s Democratic National Convention in Philadelphia.

Mrs Clinton’s campaign continued to express confidence that she would be able to unify the party.

“Hillary Clinton is grateful to the thousands of Nevadans who came out to participate in the caucuses and convention process,” Clinton campaign manager Robby Mook said.

“She believes every voice should be heard and no one should be intimidated, harassed or threatened in this process. When the primary process is complete, our party must come together and ensure a Democrat is elected to serve as our next president,” Mr Mook said.

Mr Sanders on Tuesday joined his supporters in criticising the Nevada Democratic Party after Saturday’s events.

One Sanders supporter threw a chair, unhappy about being blocked in a rules vote that was part of the effort to help the senator win more delegates to the national convention. Others drew chalk graffiti on a party building, while the state’s party chairwoman has been receiving death threats.

“If the Democratic Party is to be successful in November, it is imperative that all state parties treat our campaign supporters with fairness and the respect that they have earned,” Mr Sanders said in a statement on the Nevada incident.

Mr Sanders’s continued presence in the race is prompting concerns among Clinton allies that he will damage her ability to take on Mr Trump and hurt her in the autumn.

But Sanders supporters shrug off that worry, arguing that Mr Trump is such a flawed candidate that Mrs Clinton will easily dispatch with him if she faces him in the November 8th election.

“Ultimately, we are confident that the passion and energy from the primary will be united in a common purpose – to move forward the ideals of our party and keep the White House out of Donald Trump’s hands,” her campaign manager Mr Mook said.