US duck boat victims included nine members of one family

Tia Coleman lost nine members of her family, including her children and husband, when an amphibious boat carrying tourists capsized and sank on a Missouri lake during a thunderstorm. Video: Reuters 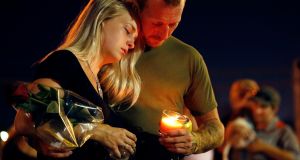 Brandon Webb and Carlye Michel participate in a candlelight vigil in the parking lot of Ride the Ducks on Friday. Photograph: AP

Vigils have been held by a grief-stricken community following the death of 17 people — including nine from one family — in a tourist boat accident in Missouri.

At one memorial, about 300 people gathered in the car park of Ride the Ducks of Branson and sang Amazing Grace. Mourners at a church sang the same words.

“Even though we may not know any of them it doesn’t matter,” said Tammy Miesner (54) of Branson. “It’s a part of our lives to be there for each other.”

Divers found the final four bodies on Friday in Table Rock Lake, near Branson, after the deadliest accident of its kind in nearly two decades.

Investigators were trying to determine what sent the vessel known as a duck boat to its demise.

An initial assessment blamed thunderstorms and winds that approached hurricane strength, but it was not clear why the amphibious vehicle even ventured out into the water.

Officials have not released the names of the victims, but the details emerged throughout the day. Among them were a popular duck boat driver, a father and son visiting from Arkansas, and nine relatives from Indiana, many of them children, who were on the ill-fated boat only because of a mix-up.

The risk of heavy weather was apparent hours before the boat left shore.

The National Weather Service in Springfield, about 40 miles north of Branson, issued a severe thunderstorm watch for its immediate area on Thursday, saying conditions were ripe for winds of 70mph.

It followed up at 6.32pm with a severe thunderstorm warning for three counties that included Branson and the lake. The warning mentioned both locations. The boat went down about 40 minutes later, shortly after 7pm local time.

“When we issue a warning, it means take action,” meteorologist Kelsey Angle said.

A full investigation was underway, with help from the Coast Guard and the National Transportation Safety Board. Stone County Sheriff Doug Rader urged anyone with video or photos of the accident to contact authorities.

At the rally at the duck boat business, the Reverend Zachary Klein said he had no words of comfort to offer the families of victims “because there simply are no words to comfort them”.

Suzanne Smagala, of Ripley Entertainment, which owns Ride the Ducks in Branson, said the company was assisting authorities. She said this was the company’s only accident in more than 40 years of operation.

Twenty-nine passengers and two crew members were aboard for a pleasure cruise. Seven of the 14 survivors were hurt when the vessel went down. At least two children and two adults were still in hospital on Friday afternoon. The captain survived, authorities said.

Among the injured was 14-year-old Loren Smith of Osceola, Arkansas. Her father, 53-year-old retired maths teacher Steve Smith, and her 15-year-old brother, Lance, died in the accident. Loren suffered concussion but survived.

“It’s a hard thing,” Mr Smith’s father, Carroll Smith, said of losing his only child and his only grandson. “It’s a very difficult day.”

Tracy Beck, of Kansas City, Missouri, said she recalled the family who lost nine members waiting in line and blamed a possible ticket mix-up for them ending up on the ill-fated boat. She said the ticket taker realised after they stopped for a photo that they should have boarded at a different location and assigned them new tickets. – PA