US candidates in last push for New Hampshire 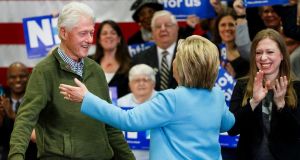 Republican and Democratic candidates fired closing salvoes at their nearest rivals in the final day of campaigning before the New Hampshire primary, the second nominating contest in the US presidential race.

The ballot is critical for several Republican candidates struggling to figure in a race dominated by celebrity and anger in the candidacies of bombastic businessman Donald Trump and conservative Ted Cruz.

Coming off a razor-thin victory in Iowa, the first presidential vote last week, Mrs Clinton has aggressively challenged Mr Sanders to try to narrow his average 13-point lead in the New England state.

Addressing the millions of dollars she has received from Goldman Sachs and other Wall Street firms, she told a raucous crowd at rally in Manchester that Mr Sanders took about $200,000 indirectly from a Wall Street firm through the Democratic Senate Campaign Committee.

“There is nothing wrong with that. It hasn’t changed his view. Well, it didn’t change my view or my vote either,” she said, drawing cheers. She made her comments after engaging with an audience member who tackled her on the issue: “You took their money!” he shouted.

“The hotter this election gets the more I wish I were just the former president and just for a few months not the spouse of the next one because, you know, I have to be careful what I say,” he said.

Mr Clinton said on Monday that he understood and respected the anger and apprehension of Americans – sentiments Mr Sanders has harnessed in his come-from-behind campaign against Mrs Clinton.

Noting how 84 per cent of Americans had not received a pay rise since the financial crash, the former president quoted “the great Irish poet William Butler Years” and a line from his poem Easter 1916: “Too long a sacrifice can make a stone of the heart.”

On other side, establishment Republican candidates attempted to hurt Marco Rubio’s chances further after the Florida senator’s flustered performance in Saturday’s final debate before the primary.

New Jersey governor Chris Christie, who scored the biggest hits against Mr Rubio on Saturday, told reporters: “I think Saturday night changed everything.” Referring to Mr Rubio’s donors, he said: “I think a lot of cheques are being ripped up this morning.”

Mr Rubio is still basking in his surprisingly strong third- place finish in Iowa behind Mr Cruz and Mr Trump. A Rasmussen poll put Mr Trump’s lead nationally at 31 per cent followed by Mr Rubio on 21 per cent, Mr Cruz on 20 per cent and Ohio governor John Kasich, who is gaining notice, on 6 per cent.

A Reuters/Ipsos poll showed Mrs Clinton and Mr Sanders in a statistical tie with her 48 per cent to 45 per cent lead among Democratic voters, falling within the margin of error.

1 The far right rises: Its growth as a political force in Ireland
2 Coronavirus: Public health experts considered idea of moving Dublin to Level 4
3 Why are some in Fianna Fáil unhappy with Micheál Martin?
4 Coronavirus: From midnight Dublin will move to level three until October 10th - Taoiseach
5 Wife not entitled to deceased husband's entire estate, High Court rules
Real news has value SUBSCRIBE