US and Cuba reach agreement on embassies 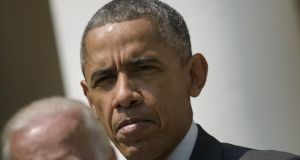 The US and Cuba have agreed to open embassies in each other’s capitals, as the countries bid to restore ties after more than 50 years of hostilities.

US president Barack Obama is expected to announce the agreement at the White House.

The Cuban foreign ministry said the embassies in Washington and Havana would open July 20th.

The US and Cuba have been negotiating the re-establishment of embassies following a surprise December announcement that secret talks had led to an agreement to restart diplomatic relations.

For Obama, ending the US freeze with Cuba is central to his foreign policy legacy as he nears the end of his presidency.

Obama has long promoted the value of direct engagement in foreign policy and has argued that the US embargo on the communist island about 90km south of Florida was ineffective.

Ahead of Obama’s remarks, the top US diplomat in Havana delivered a letter from the White House to Cuba concerning the restoration of embassies in the countries’ respective capitals.

US interests section chief Jeffrey DeLaurentis arrived at the Cuban foreign ministry in Havana on Wednesday morning to hand-deliver the message.

The US cut off diplomatic relations with Cuba in 1961 after Fidel Castro’s revolution.

The US spent decades trying to either actively overthrow the Cuban government or isolate the island, including toughening the economic embargo first imposed by president Dwight D Eisenhower.

Since the late 1970s, the US and Cuba have operated diplomatic missions called interests sections in each other’s capitals.

The missions are technically under the protection of Switzerland, and do not enjoy the same status as embassies.

While the opening of embassies marks a major milestone in the thaw between the US and Cuba, significant issues remain as the countries look to normalise relations.

These include talks on human rights; demands for compensation for confiscated American properties in Havana and damages to Cuba from the embargo; and possible cooperation on law enforcement.