Tension over pipelines simmer in the Nebraska sun

A group gathers in Nebraska to protest against the Keystone XL pipeline plans. Native Americans are leading the protests due to fears of water and land contamination. Video: Suzanne Lynch/Irish Times video team 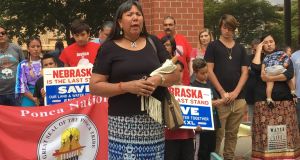 Members of the Ponca tribe outside the hearing in Lincoln into the construction of the Keystone oil pipeline through Nebraska. Photograph: Suzanne Lynch

In the ninth part of her series “Coast to Coast: Travels in Trump’s America”, Washington Correspondent Suzanne Lynch travels to Nebraska

It’s a regular midweek afternoon in the small city of Lincoln, Nebraska, but outside the Marriott Hotel in the quiet downtown area a protest is under way.

Dozens of demonstrators and their supporters, ranging from members of the Native American community to local landowners, have gathered outside a hotel where a week-long hearing is taking place into the construction of the Keystone oil pipeline through Nebraska.

Nearby, dozens of police watch at a discreet distance as a group of native American people set out their opposition to the pipeline that will run through their territory, as well as private land owned by farmers along the route.

Controversy over the Keystone XL pipeline – a mammoth underground oil pipeline that will funnel oil from Alberta in Canada to the Gulf Coast in Texas – has raged since it was commissioned in 2010.

In 2015 the then president Barack Obama vetoed its construction, but Donald Trump approved the pipeline – and a second project known as the Dakota Access pipeline — in one of his first executive orders as president. He had frequently endorsed the pipeline proposals during his election campaign, claiming it would create tens of thousands of jobs.

This month’s hearing by a five-member commission in Nebraska represents one of the final hurdles to the construction of the Keystone project by energy giant TransCanada. While the federal government needs to approve the project, it must also get sign-off by the states it traverses. Montana, South Dakota have already approved it – Nebraska has yet to do so. A decision is expected in November.

Gary Dore is a member of the Nez Perce Native American tribe from Idaho. He travelled to attend the hearings to support members of the Ponca and Rosebud tribes who live in Nebraska.

“My community is a large community spanning many different states, so when one of our relatives are hurt we all come together,” he tells me. But he is worried that Nebraska’s commission has already made its decision, despite the public hearings. In particular, many opponents are frustrated that the terms of reference of the commission precluded some testimony related to safety concerns from being included.

As representatives of the Ponca tribe lead prayers outside the building, I speak to another member of the Native American community who has travelled from California with his family. “We’re here to protect the water, the land, and to make sure that we keep the water clean for the generations to come,” he says.

This man and Gary Dore also travelled to North Dakota to support the Sioux tribe during months of protests against the Keystone pipeline at camps near their reservation last year.

Also represented at the hearing in Lincoln are dozens of farmers who will be affected by the pipeline. Art Tanderup and his wife Helen farm a 160-acre farm in north east Nebraska which has been in Helen’s family for 100 years.

He is concerned about leaking and the effect on the water supply, particularly given the state’s massive supply of groundwater which has been key to its development as an agricultural state.

But many in Nebraska don’t share his view. The state’s governor, Pete Ricketts, has said he is confident the commission will approve Keystone XL, calling it “the safest pipeline ever built”.

Nebrasksa’s five members of Congress – all Republicans – support the project, which they hope will generate extra revenue in property taxes to the state and lead to tens of thousands of construction jobs. Nebraska is solid Republican territory and a conservative state, a reality that becomes even more conspicuous as I leave Lincoln, and drive west into the state.

About 11,000km west of Chicago, Nebraska is one of a clutch of midwestern states dominated by agriculture. Corn, soybean and wheat are the primary crops grown, while livestock is also kept on its estimated 50,000 farms. One in four of the population is employed directly or indirectly in agriculture, which contributes about $23 billion annually to the state.

As I drive west I come off the I-80 freeway that traverses the state from east to west and drive north into the countryside.

With its wide, expansive landscape, Nebraska is the land of prairies and long sunsets. The soft sandy soils of the region imbue the land with a warm, yellow hue. Fields, rich with waving corn, seem to stretch for miles into the horizon.

I stop at Broken Bow, one of the many small frontier towns that emerged as Nebraska was discovered and settled by white settlers in the 19th century.

Thanks to the railway that stopped in the town, Broken Bow developed into something of an urban centre, providing schools, shops and churches to the farming communities that worked the surrounding countryside.

Driving into the centre of town, with its elegant square and quaint selection of shops, it’s like stepping back in time. The local hotel has a sign in the window stating: “Cowboys welcome”; the central square resembles a scene from a Western.

Life shifts down a gear in Broken Bow, as pick-up trucks driven by local farmers cruise around the dusty streets and children play in the central playground. Like other similar towns in rural Nebraska, Broken Bow voted overwhelmingly for Donald Trump in last year’s election.

A Democrat has not won Nebraska since 1964, and while Hillary Clinton had strong support in the cities of Omaha and Lincoln in the east of the state, the fact that Republicans won all five Congressional seats solidified Nebraska’s standing as a reliable red state.

Broken Bow has all the signs of rural conservatism – the local radio is advertising the upcoming gun show in the town – while the population is overwhelmingly white. Everyone I speak to seems to be a Republican who voted for Donald Trump.

Carter and Linda moved to Broken Bow from Omaha, and both are happy with how the president is doing. “They need to give him a chance. The liberal media wants him to fail, but I think he is trying to do good things.”

Others say that they wanted a Republican back in the White House after eight years of Barack Obama. “He was too weak; he didn’t understand the issues facing people like us, who live and work hard in rural communities,” says Bill, a local farmer.

There are no signs so far that the agricultural community is losing trust in the president, despite fears among many farmers that they could be impacted by Trump’s promises on trade, particularly his pledge to pull out of Nafta, the US’ trade agreement with Canada and Mexico.

Both Canada and Mexico are key export markets for US farmers, with Nebraska exporting most of its corn to Mexico. The National Corn Growers Association has warned that withdrawing from Nafta “would be disastrous for American agriculture”.

For the moment, at least, life is continuing at its measured, steady pace here in Nebraska, with most people saying they are willing to give Trump a chance.

As I leave, and drive through the great plains and empty fields of the state, I stop for petrol at North Platte, as I prepare to rejoin the I-80 and continue west towards the border with Colorado.

I speak to Randy, who is originally from neighbouring Kansas but is visiting Nebraska on business for the day. Like most people in the region, he works in agriculture and is a Republican.

While he says he is not entirely happy with the way the country is being run – “the administration needs to get things done” – he thinks rural America is well-served.

“We’re very fortunate in small towns, but look at the big cities, how bad crime is. Little towns like this – they’re a great place to live.”

As we chat I tell him that my final destination is California. He smiles as he opens the door of his white pick-up truck. “Woah, it’s a whole different picture over there. Liberals everywhere. Good luck!” he says as he revs his engine and drives off into the distance.