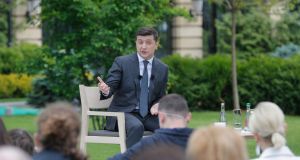 Ukrainian president Volodymyr Zelenskiy has said he wants to resume peace talks with Russia when the coronavirus pandemic allows, and admitted one year after taking power that he may break a promise not to seek a second term.

The former comedian beat incumbent Petro Poroshenko in a landslide last spring on pledges to crush corruption, strip super-rich oligarchs of political influence, boost Ukraine’s economy and end a conflict with Russia that began in 2014.

The inexperienced Mr Zelenskiy (42) has been buffeted by major events beyond his control, however, while also failing to deliver on his commitment to help a new generation of reformers overhaul Ukrainian politics and business.

Mr Zelenskiy and Ukraine became an unwilling focus of impeachment proceedings against US president Donald Trump last year, and in January Iranian forces shot down a Ukrainian airliner near Tehran, killing all 176 people on board.

At home, what he called his “turbo regime” for change has been delayed and diluted, and he has dismissed most members of the reform “dream team” who he placed in key government, administrative and law-enforcement posts.

Ukraine was labouring through loan talks with the International Monetary Fund when coronavirus struck. So far 19,230 people have been infected in Ukraine, 564 have died from Covid-19 and the fragile economy has suffered another shock.

Talking to socially distanced journalists in a Kiev park near the presidential administration on Wednesday, Mr Zelenskiy said his year in power had brought stability to the hryvnia currency, lower utility costs for most Ukrainians, and the return home of 135 people in prisoner swaps with Russia.

Fighting that has killed more than 14,000 people grinds on in Ukraine’s eastern Donbas region, however, and Russian-led separatists who control parts of the area announced on Wednesday that their troops were going on to combat alert.

“We haven’t stopped trying to get back our people and our territory. A meeting of the Normandy group will take place when the coronavirus pandemic ends,” Mr Zelenskiy said, referring to talks involving the leaders of Ukraine, Russia, Germany and France.

“As regards the Russian president . . . we should negotiate with them and reach an agreement,” he said of Vladimir Putin.

Mr Zelenskiy insisted he was not influenced by any of Ukraine’s oligarchs, but admitted he could reconsider a promise to step down after one five-year term, which he said was not sufficient to fulfil his reform plans.

“Truthfully? One’s not enough . . . If there is big support from the people of Ukraine, I’ll think about [a second term].