Trump’s strongman tactics may be just what voters want

The pugnacious candidate has scrambled up the US presidential campaign 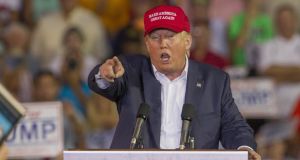 Some blondes have all the fun. As Hillary Clinton and Jeb Bush get more testy, Donald Trump gets more chesty. And more blond. It’s mind-boggling to contemplate a president Trump trying to make peace between North and South Korea, even as we watch the pugnacious candidate Trump trolling poor Jeb on Twitter and predicting that poor Hillary would have to run the country from Leavenworth.

But, as Trump would say, deal with it. The pol who refused to identify himself as a pol on his jury duty questionnaire has utterly scrambled American politics. And he has trademarked the phrase “Make America Great Again”.

“I was surprised it was available,” he told me.

Certainly, Trump could explode at any moment in a fiery orange ball. But meanwhile, he has exploded the hoary conventions, money-grubbing advisers and fundraising excesses of the presidential campaign, turning everything upside-down, inside-out, into sauerkraut.

It is a fable conjured up in several classic movies: A magnetic, libidinous visitor shows up and insinuates himself into the lives of a bourgeois family. The free spirit leaves, but only after transforming the hidebound family, so that none of them can see themselves the same way again.

That is the profound metamorphosis Trump has wrought on the race. The Don Rickles of reality shows is weirdly bringing some reality to the presidential patty-cake. The Donald’s strange pompadour and Hillary’s strange server have eclipsed all the usual primary permutations. Because Trump is so loud, omnipresent, multiplatform and cutting, he’s shaping the perception of the other candidates. Once he blurts out the obvious – Jeb is low energy, Hillary is shifty, Mitt choked – some voters nod their heads and start to see his targets in that unflattering light as well.

The real estate developer has turned a fetish for the biggest and the best – in everything from dinner rolls to skyscrapers – into a presidential vision for “the silent majority”. He’s tapped into a hunger among those who want to believe that America is not a shrinking, stumbling power passed like a pepper mill between two entitled families.

Indeed, in interviews, voters who like Trump often use an anatomical variation on the word brass. The shame spiral and money pit that followed the false Iraq narrative W and Dick Cheney put into play to remove the strongman Saddam Hussein – the identity crisis that came with the knowledge that America can no longer whip or outfox anybody – has led many Americans to want a strongman.

It’s mesmerising to watch Trump try to turn himself into a real candidate in real time. He was mocked when he said that he got his national security advice from watching “the shows” on TV. But voters know that top diplomats, spooks and generals led presidents down the tragic paths to the Bay of Pigs, Vietnam and Iraq. Jeb Bush gets his advice from Paul Wolfowitz, who naively bollixed up Iraq and gave us ISIS. And Hillary and top Republicans say they get valued counsel from Henry Kissinger, who advised Nixon to prolong the Vietnam War.

There is nothing that excites Trump the candidate more than crowing that he has a great big crowd and Jeb has a teeny-weeny crowd. He sounded orgasmic as he described to the New Hampshire town hall that his Alabama event this weekend had to be moved from a room that held 1,000 to a room that held 2,000 to a convention centre to a stadium.

So Trump should appreciate the task ahead: It’s huge. As Axelrod puts it: “In a parlance Trump would appreciate: We’re still in the swimsuit competition. It gets harder in the talent rounds.”