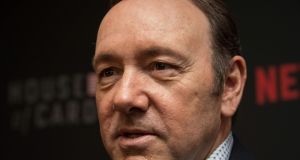 The cascade of allegations – which also include those of a filmmaker, Tony Montana, who says he was groped in an LA pub – is having an effect on Kevin Spacey professionally. File photograph: Nicholas Kamm/AFP/Getty Images

Accusations of inappropriate sexual behaviour against Kevin Spacey are mounting, with one actor claiming the Hollywood star routinely preyed on young men and sometimes invited them to the stage of the Old Vic for picnics.

Mexican actor Roberto Cavazos said there were many young men with a “Kevin Spacey story”. He added: “It seems that it only took a male under 30 to make Mr Spacey feel free to touch us.”

Star Trek: Discovery actor Anthony Rapp alleged in recent days that, when he was aged 14, a then 26-year-old Spacey made drunken sexual advances on him.

Spacey quickly posted a statement saying he could not recall the incident, but apologised and, for the first time, came out as a gay man. Since then, Spacey has not been seen or heard from in public.

On his Facebook page , Cavazos recalled a “couple of unpleasant encounters” with Spacey, including being squeezed by him in the Old Vic bar. He recalled being told a similar story by many people of how Spacey invited young male actors to the Old Vic to “talk about their careers”.

Cavazos continued: “When they arrived at the theatre, the gentleman had prepared a picnic with champagne on the stage, beautifully lit.” More common was that Spacey was in the bar, “squeezing whoever caught his attention”, Cavazos alleges.

Cavazos said his direct experiences with Spacey were on the edge of harassment. “Had I been a woman, I probably would not have hesitated to identify it as such, but I suppose that the lack of a more specifically direct or aggressive action led me to justify the incident as ‘one of those things’,” he said.

Spacey was artistic director of the Old Vic for 11 years until 2015. The theatre says it received no complaints about any inappropriate behaviour but has expressed “deep dismay” at the allegations and opened up a confidential complaints process if people want to come forward.

A West Sussex barman, Daniel Beal, has claimed Spacey exposed himself to him and then gave him a £5,000 watch to keep him quiet. Mr Beal told the Sun the incident happened when he was 19 and having a cigarette break.

He alleges Spacey sat next to him on a bench and flashed at him saying: “It’s big, isn’t it?” The barman returned to work, followed by Spacey, who insisted he take his watch. “I thought he was joking but he took off his watch and gave it to me. Looking back I realise it was to keep me quiet.”

Mr Beal is pictured in the Sun wearing the IWC Schaffhausen Portofino watch, which he sold for £3,200 the next day.

An anonymous man has told the BBC’s Victoria Derbyshire programme that he was traumatised after he woke up to find Spacey lying on him. The man says he was a teenager when the incident took place in 1985. He had been invited to stay at Spacey’s New York home and the actor asked him to share his bed. He declined and slept on the sofa, waking up to find Spacey’s head on his stomach and his arms wrapped around him.

The man believes Spacey was grooming him. “I was uncomfortable at best, traumatised at worst. He was either very stupid or predatory – or maybe a little of both.”

The cascade of allegations – which also include those of a filmmaker, Tony Montana, who says he was groped in an LA pub – is having an effect on Spacey professionally.

The International TV Academy has withdrawn the planned offer of a special Emmy award, while Netflix has suspended production on the sixth season of House of Cards “to give us time to review the current situation and to address any concerns of our cast and crew”.

Spacey’s method of apologising – coming out at the same time as saying sorry for a sexual advance on a minor – has attracted derision from the gay community. The actor Zachary Quinto called it “deeply sad and troubling”.

Representatives of Spacey have yet to comment on the latest developments. – Guardian service