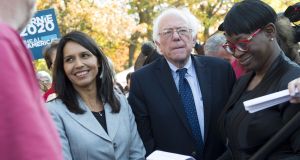 Donald Trump’s unorthodox US presidential transition continued on Monday when he held talks with one of the most prominent supporters of leftwing Democrat Bernie Sanders.

The US president-elect’s first meeting of the day at Trump Tower in New York was with Tulsi Gabbard, a Democratic maverick who endorsed the socialist Sanders during his unsuccessful primary battle with Hillary Clinton.

Over the past few days Mr Trump has also held talks with Mitt Romney, who once branded him a “phoney” but is now under consideration for possible secretary of state; Ted Cruz, whom he labelled “Lyin’ Ted” during the Republican primary campaign; and Democrat Michelle Rhee, the former schools chief of Washington, who is mooted as a possible education secretary.

The celebrity businessman’s aides have characterised him as a dealmaker who intends to cast the net wide for diverse talents. US president Barack Obama has called Mr Trump “pragmatic”, not an “ideologue”, while former secretary of state Henry Kissinger said he would be a unique president because he “has no obligation to any particular group”.

He is entertaining both loyalists and rivals, although his three appointments so far – Jeff Sessions for attorney general, Mike Pompeo for CIA chief and Michael Flynn for national security adviser – have been in the former category.

At first glance Ms Gabbard, who is from Hawaii and is the first Hindu member of the US Congress, seems an unlikely counsellor. She resigned from the Democratic National Committee to back Vermont senator Sanders and formally nominated him for president at the party convention in July, crediting him with starting a “movement of love and compassion”, although by then Clinton’s victory was certain.

But the Iraq war veteran has also expressed views that might appeal to Trump, criticising Obama, condemning interventionist wars in Iraq and Libya and taking a hard line on immigration. In 2014, she called for a rollback of the visa waiver programme for Britain and other European countries with what she called “Islamic extremist” populations.

In October last year she tweeted: “Al-Qaeda attacked us on 9/11 and must be defeated. Obama won’t bomb them in Syria. Putin did. #neverforget911.” She was then among 47 Democrats who joined Republicans to pass a Bill mandating a stronger screening process for refugees from Iraq and Syria coming to the US.

Media reports have suggested that Mr Trump’s chief strategist Steve Bannon is an admirer of Ms Gabbard. Last week, when 169 Democrats signed a letter condemning Bannon’s appointment by Trump for encouraging white nationalism, she was not among them.

Trump, the former host of The Apprentice, continues to throw out hints and teases about his cabinet picks reminiscent of a reality TV show. “We really had some great meetings, and you’ll be hearing about them soon,” he said on Sunday.

Kellyanne Conway, Trump’s former campaign manager and still a key aide, told Fox News that Perry is a possible contender to lead the defencee or energy departments while Fallin is being considered to head the interior department.