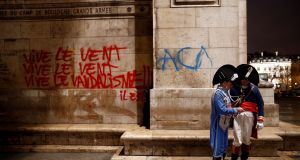 Graffiti on a wall at the Arc de Triomphe in Paris on the day after serious clashes with yellow vest protesters. Photograph: Stephane Mahe/Reuters

A crane stacked carcasses of charred cars atop a flatbed lorry on the avenue de la Grande Armée. Green municipal vans with power hoses began a three-day clean-up at the Arc de Triomphe. “The yellow vests will triumph,” graffiti said. “The state. The cops. The fascists,” said the message scrawled under a Circle-A, the symbol of anarchists.

Paris’s triumphal avenues looked like a battlefield on Sunday, following the worst riots in the centre of the capital since the May 1968 revolution. Near the Irish embassy on the avenue Foch, rioters built barricades from tree trunks. In the boulevard Haussmann, they tore municipal bicycles from their stands for the same purpose.

The Printemps and Galeries Lafayette, temples of luxury and consumerism, had to be evacuated. In the Tuileries gardens, last destroyed in the 1870 Commune, a protester was seriously injured when a wrought iron fence dug up by the yellow vests fell on him.

Three people have died in three weeks of protests. Another 133 were wounded on Saturday, including a woman struck in the head by a projectile at Charleville-Mézières. Rioters twice over-ran the landing strip at Nantes airport. They stole an assault rifle from a police van in Paris, commandeered a digging machine from a building site near the Arc de Triomphe, set fire to a prefecture in upper Loire and threw acid at police in Tours.

President Emmanuel Macron was the main focus of their hatred. “Macron will pay for Christmas,” “Macron, son of a bitch,” and “Banker thieves. Government crooks. Revolution” were daubed on the walls of Paris’s grand avenues.

On his return from the G20 summit in Argentina on Sunday, Macron inspected the Arc de Triomphe and surrounding avenues. A group gathered round him, jeering, “Macron, resignation”. While police clamoured for Macron to declare a state of emergency, the Élysée announced that the president “would not express himself” right away.

Traffic clogged as motorists slowed to view the destruction. Tourists snapped photographs of broken glass and charred vehicles. At the same time, dozens queued to buy luxury handbags at Louis Vuitton. Was it revolution, or just a dangerous game of pretend?

Most of the 412 people detained on Saturday were ordinary citizens who support the yellow vests. The real culprits, the casseurs or vandals who played cat-and-mouse with police firing tear gas, ran fast enough to evade arrest.

There’s no pre-determined protest route, no organisers to talk to. The yellow vests have been submerged by the casseurs

The proportion of casseurs has increased, as the number of protesters dwindled to 136,000 countrywide on Saturday. Interior minister Christophe Castaner has accused the far right of responsibility for the violence. Le Pen said it was the fault of “extreme left-wing factions”.

It was impossible to fight such an unstructured movement, police said. “The forces of order cannot organise in advance,” said Philippe Capon of the Unsa police syndicate. “There’s no pre-determined protest route, no organisers to talk to. The yellow vests have been submerged by the casseurs.”

In one of the most telling scenes of the riots, 20 yellow vests sat in a circle, like Indians around a campfire, to protect the flame to the Unknown Soldier from the casseurs. Members of the public are distinguishing between the yellow vests and the vandals. Opinion polls show 80 per cent of the population are supporting the former.

“The yellow vests defend everybody’s interests,” said the taxi driver who took me on a tour of the destruction. “Since they started their protests, the price of diesel has fallen dramatically… But I didn’t sign up for the casseurs. I know people who lost their cars yesterday, or had their shops damaged.”

Glorification of France’s “revolutionary spirit” helps to explain the riots. Marianne, the country’s symbol, whose bust stands in every town hall, wears the Phrygian cap of revolution. The frieze on the side of the Arc de Triomphe, desecrated this weekend, shows Liberty Leading the People.

The handful of self-proclaimed spokespersons who have emerged to speak for the yellow vests appear to have been shocked by the violence. They published an appeal in the Journal du Dimanche on Sunday. “We are offering the government an exit from the crisis,” they said. “Democracy belongs to the people.”

Taxation, which comprises 48.3 per cent of French GDP, the highest percentage in the EU, is a major grievance.

The yellow vests’ first demand was the creation of an “estates general on fiscal policy”. The “estates general” was a consultative body, resurrected by Louis XVI from May until July 1789 in the hope of defusing unrest. That experiment ended in full-blown revolution, regicide and the Terror.