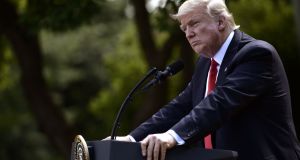 A tweet by US president Donald Trump raised concerns that he could use his constitutional power to grant pardons to himself or family members. Photograph: Brendan Smialowski/AFP/Getty Images

A lawyer for Donald Trump weighed into the growing controversy over the US president’s claim that he has “complete power” to pardon, insisting that the issue had not been discussed by the leader’s legal team.

In an interview on ABC, Jay Sekulow, one of the president’s personal attorneys, said the question of whether Mr Trump had the power to pardon himself and his family members had not been discussed.

“We’re not researching the issue because the issue of pardons is not on the table,” Mr Sekulow said. “There’s nothing to pardon from.”

Mr Trump sparked controversy over the weekend when he tweeted that “all agree the US President has the complete power to pardon,” raising concerns that he could use his constitutional power to grant pardons to himself or family members.

The issue has surfaced in recent days as the president has moved to beef up his legal team while the Russia investigation, led by special counsel Robert Mueller, gathers pace.

Anthony Scaramucci, the newly-appointed White House communications director also said in a series of TV interviews on Sunday that the president was not considering issuing pardons.

“The president is thinking about pardoning nobody,” he told NBC. “The truth of the matter is that the president is not going to have to pardon anybody because the Russian thing is a nonsensical thing.”

Meanwhile, the Democrat leader in the Senate, Chuck Schumer, said that any move by the president to pardon himself or someone close to him would be a “cataclysm”, adding that senior Republicans such as senate majority leader Mitch McConnell would not “just stand by”. “It would be one of the greatest, greatest breaking of rule of law, of traditional democratic norms of what our democracy is about,” Mr Schumer said.

While the US president has power to issue pardons – Gerald Ford famously pardoned his predecessor Richard Nixon – any move by Mr Trump to pardon himself would have to be decided on by the Supreme Court.

Mr Trump, who spent much of Sunday at his golf course in Virginia, will travel to Ohio on Tuesday for a campaign-style rally.

Meanwhile, as Congress agreed tough new sanctions on Russia, the White House gave mixed messages about whether it supported the move. While newly-appointed press secretary Sarah Huckabee Sanders said the president backed the move, Mr Scaramucci said Mr Trump had yet to decide whether to sign the Bill.