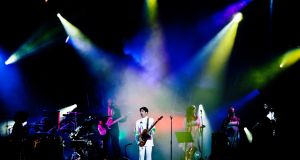 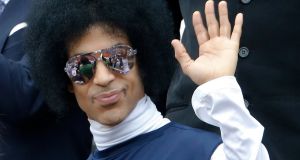 US singer Prince. Prince has died at the age of 57. File photograph: Jean-Paul Pelissier/Reuters

The world of showbusiness has paid its respects to Prince, who has died aged 57.

Rapper Lupe Fiasco, who is scheduled to perform in Minneapolis tonight, encouraged concert-goers to wear purple in honour of the artist’s iconic song Purple Rain.

“We gone put on for Prince tonight!” tweeted Fiasco.

Broadcaster Zane Lowe, wrote on Twitter: “I can’t believe he has gone. Thank you for everything Prince. You will always be The Greatest #RIPPrince.”

Hip hop artist Chance The Rapper said: “None of Prince’s albums are available in digital format. You have to find a physical copy. I appreciate that, ’bout to go an adventure.”

Radio DJ Huey Morgan said: “RIP Prince! One of the best of all time! You will be missed my brother.”

Kiss singer Gene Simmons wrote: “PRINCE, sad to say, has passed on!!! He was a Giant. My deep condolences go out to his family, friends and fans.”

Chelsea Clinton, daughter of Bill and Hillary, tweeted: “Thank you Prince. All my thoughts and prayers are with all your loved ones.”

Singer Katy Perry also paid tribute to the musician, writing: “And just like that . . . the world lost a lot of magic. Rest in peace Prince! Thanks for giving us so much . . .”

Beach Boys star Brian Wilson tweeted: “I’m shocked to hear that Prince passed at such a young age. Musically, he could do it all: sing, play, arrange and produce. Love and Mercy.”

Hip hop artist Big Sean paid his tribute to the singer’s influence: “Rest In Paradise Prince and thank you for blessing us all with your work n’ presence.”

Duff McKagan said: “What do we do now? PRINCE. No. I hope you weren’t in much pain . . . your music saved me time and again.”

Singer Chaka Khan posted a picture of herself with Prince on Twitter, adding: “I LOVED him, the world LOVED him. Now he’s at peace with his Father. Rest in power, Prince, my brother.”

Sharon Osbourne wrote: “Seems like I’m in a dream. Prince dead at 57. There are no words to describe this loss.”

Music producer Quincy Jones tweeted: “RIP to Prince . . . a true artist in every sense of the word. Gone way too soon.”

Film director Spike Lee wrote on Instagram: “I Miss My Brother. Prince Was A Funny Cat. Great Sense Of Humour.”

Rapper Missy Elliott posted an image of Prince on Twitter, saying: “This is so heartbreaking. I had this Prince pic drawn on my wall years ago because his music inspired so many RIP”

Apple boss Tim Cook referenced the singer’s innovation as a musician, writing: “Prince was a true innovator and a singular artist. His music and influence will live on for generations. Rest in peace.”

Actor-singer Will Smith said in a Facebook post that he was “stunned and heartbroken,“ and had just spoken to Prince the night before his death.

“Today, Jada & I mourn with all of you the loss of a beautiful poet, a true inspiration, and one of the most magnificent artists to ever grace this earth,” he said.

“Prince” became the top-trending term on Twitter in the United States shortly after his death was reported. As of Thursday afternoon, his name had been tweeted more than 2.8 million times.

Veteran R&B artist Lionel Richie said on Twitter, “I can’t believe it, I’m in total shock. So many wonderful memories, I will miss him.”

“This is what it sounds like when doves cry.. Prince R.I.P. Condolences to his family & 2 us all,” tweeted actor Whoopi Goldberg.

Prince, born Prince Rogers Nelson, was a beloved icon in his home state of Minnesota. Following the news of his death, the Minnesota Vikings National Football League team tweeted “We’ve lost a legend way too soon.”

Prince recorded a song about the Minnesota Vikings, “Purple and Gold,” in 2010.