On the anniversary of Donald Trump's inauguration thousands of people marched in cities across the US denouncing his views on immigration, abortion, LGBTQ rights, women’s rights and more. Video: Reuters 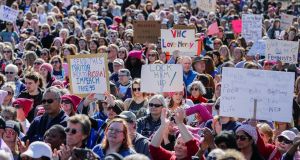 People hold protest signs while participating in the Power to the Polls rally in Atlanta, Georgia. Photograph: Erik S Lesser/EPA

A year after millions of women and men demonstrated in cities around the globe in an extraordinary rebuke of Donald Trump, crowds returned to the streets on Saturday.

Tens of thousands turned out in Washington, New York, Los Angeles, Philadelphia and hundreds of other cities across the US and the world. Many women wore pink knit “pussy hats”, an enduring symbol of the Women’s March and the so-called “resistance” to Mr Trump.

In Washington, where the federal government was shut down amidst gridlock in Congress, the steps of the Lincoln Memorial were dotted with pink hats and handmade placards. A group of protesters held large block letters to spell “impeach”.

The rally stretched along the national mall towards the Washington monument. A few dozen daring protesters watched the rally from atop the frozen reflecting pool. Under a warm sun, the pool began to melt. Several people had to be fished from the icy water.

Crowds were generally upbeat, basking in the sunshine. Activists said they were encouraged by a string of liberal victories in the past year, including the election of Democrats in state elections in Alabamaand Virginia. But there was also a sense of challenges still ahead, especially as the 2018 congressional midterms approach.

“I think maybe there’s more anger this year,” said Liz Weiderhold, a teacher in Virginia who said she marched in Washington last year as well. “You can feel the pressure in the pressure cooker. We’re more exasperated now that he’s been in office for more than a year and we’ve seen what a disaster it’s been.”

The 2017 protest touched off a year of political resistance to Mr Trump’s presidency often led by women.

As speakers including House minority leader Nancy Pelosi and Democratic senator Kirsten Gillibrand noted during their remarks to the Washington rally on Saturday, women are running for office in record numbers and aiding grass-roots efforts to protest, flooding lawmakers with calls and emails. 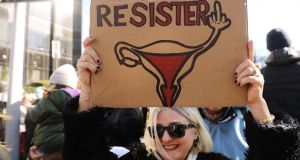 The best signs from the 2018 Women's March

Beautiful weather all over our great country, a perfect day for all Women to March. Get out there now to celebrate the historic milestones and unprecedented economic success and wealth creation that has taken place over the last 12 months. Lowest female unemployment in 18 years!

“If you care about winning back the House, flipping the Senate, then I urge you to support Democratic candidates all across the country,” Ms Gillibrand said, to booming cheers. “This is our moment to stand tall, to fight back and be heard.”

The year of protest has also seen sweeping cultural and political change around sexual harassment in the workplace, through the social-media-fuelled #MeToo movement.

Organisers said they hoped the anniversary rallies and marches would help galvanize the movement ahead of the 2018 midterms.

Last year, embarrassed that the Women’s March in Washington dwarfed attendance for his inauguration the day before, Mr Trump forced then-press secretary Sean Spicer to falsely claim the president drew the “largest audience to witness an inauguration, period”.

This year - if facetiously - Mr Trump sought to embrace the marches.

“Beautiful weather all over our great country, a perfect day for all Women to March,” the president tweeted from the White House on Saturday afternoon, as frantic negotiations with congressional leaders over the shutdown continued.

“Get out there now to celebrate the historic milestones and unprecedented economic success and wealth creation that has taken place over the last 12 months. Lowest female unemployment in 18 years!”

Mr Trump was not supposed to be in Washington to witness the march. He had planned to be 1,600km (1,000 miles) away at his Mar-a-Lago resort in Florida, celebrating the anniversary at a lavish party with Republican donors.

Outside the White House, marchers carried wry placards. Some turned Mr Trump’s recent reported derogatory comment about “shithole countries” in Africa and Central America back on him, while others accused him of being Russian president Vladimir Putin’s “puppet” or begged him to tweet less, especially about North Korea.

In New York, thousands of people marched through Manhattan. The streets on the west side of Central Park were packed. One of the closest subway stations to the start of the march was Columbus Circle - right by the Trump International Hotel and Tower.

Lots of people posed for pictures in front of the Trump sign, among them Deborah Paray and Marteen Dinzes, both from New Jersey. They had fashioned a sign depicting Trump with a large hole for a mouth.

“A lot of shit comes out of that hole,” Ms Dinzes said.

In Los Angeles, protesters were greeted by shouting vendors selling buttons, pink “pussy hats” and branded scarfs. One vendor, Walter Lopez, said he woke up at 3am to get to the march from Redondo Beach.

“I’m impressed by how many people showed up,” he said. “And I’m all about women, people, human beings. It’s a good thing I woke up.” –Guardian