Life of boxing legend, remembered in Louisville, a chance to ‘reset what Islam means’

Fans of the late Muhammad Ali gathered at the Muhammad Ali Centre in his hometown of Louisville, Kentucky, ahead of his interfaith funeral. Mayor of Louisville Greg Fischer was among groups of people visiting his memorial. Video: Simon Carswell 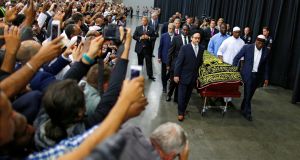 Worshipers and well-wishers look on as the body of the late boxing champion Muhammad Ali is brought for his jenazah, an Islamic funeral prayer, in Louisville, Kentucky. Photograph: Carlos Barria/Reuters

Thousands of mourners descended on Louisville in Kentucky, the hometown of “the Greatest”, Muhammad Ali, to send off boxing’s most famous son and remember with pride his battles inside and outside the ring.

The three-time heavyweight boxing champion, who died in an Arizona hospital last Friday at 74 after a long fight against Parkinson’s disease, was mourned at a Jenazah, a traditional Muslim prayer service, in Freedom Hall, the Louisville venue where Ali fought his last hometown fight in 1961.

Hundreds attended the service, which was open to all but was a chance, at a time of anti- Islamic fervour stirred by the US presidential election, for Muslims to pay their respects to a man seen as a champion of their faith.

During the 45-minute ceremony the showboating boxer, political activist and humanitarian champion was remembered as “the people’s champion” and “an unapologetic fighter” for African- and Muslim-Americans, and for his stand against the Vietnam War, an act that cost him prime boxing years.

“For millions, perhaps billions of people across the world, of every race, of every religion, of every political persuasion and every nationality, the passing of Muhammad Ali has made us all feel a little more alone in the world,” Muslim scholar Sherman Jackson told mourners.

Muslim leaders and dignitaries including Rev Jesse Jackson, Nation of Islam leader Louis Farrakhan, boxing promoter Don King and former champion Sugar Ray Leonard joined Ali’s family members at the service. Nihad Awad, national executive director of the Council on American-Islamic Relations, told The Irish Times that remembering Ali’s life was a chance, in contrast to the political rhetoric, to “reset” what Islam means. His death was forcing many “to rethink positively that when you mention the name Muhammad, you think of Muhammad Ali”, he said.

About 15,000 people are expected to attend an interfaith funeral service at Louisville’s main sports arena today.

Speakers will include Lonnie Ali, the boxer’s widow, former US president Bill Clinton and comedian Billy Crystal. The mourners will include Mayor of Ennis Pat Daly, and Clare County Council chief executive Gerard Dollard. The champion’s great-grandfather Abe Grady emigrated from Ennis in 1860, roots Ali honoured with a visit to Clare in 2009.

Turkey’s president Recep Tayyip Erdogan, who was told he would speak at today’s funeral but was later dropped from the schedule, attended yesterday’s Muslim service.