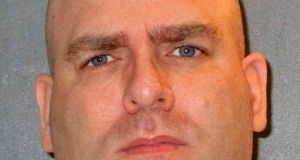 Larry Swearingen who had long maintained his innocence, was executed for the abduction, rape and murder of a Houston community college student more than 20 years ago. Photograph: Texas Department of Criminal Justice via AP

A man has been executed in Texas for the rape and murder of a 19-year-old college student following arguments from his attorneys that authorities ignored key evidence that would exonerate him.

Larry Swearingen (48) who had professed his innocence in the case, was given a lethal injection and pronounced dead at 6.47 pm central time (12.47am Irish time) at the state’s death chamber in Huntsville, Jeremy Desel, a spokesman for the Texas department of criminal justice said in an email.

Swearingen’s last words were: “Lord forgive them. They don’t know what they are doing,” according to Mr Desel. Swearingen had faced five previous execution dates over the past two decades.

A jury convicted and sentenced Swearingen to die in 2000 for the murder of Melissa Trotter, who disappeared on December 8th, 1998. Ms Trotter was found dead 25 days later in a densely wooded area in the Sam Houston National Forest with a piece of pantyhose around her neck.

During Swearingen’s trial, prosecutors laid out a case based on witness testimony, cellphone records and evidence found in his house and truck that they said linked him to her death.

At his trial and in a series of appeals that wound through Texas and federal courts, his lawyers pointed to DNA evidence under the victim’s fingernails that came from a man other than Swearingen.

They also had experts testify that the state of Ms Trotter’s body showed she must have died after Swearingen was in custody following his arrest on other charges.

Prosecutors, in court papers, responded that the DNA from another man could have come from contamination of evidence and that Ms Trotter’s body had the same clothing she was seen wearing the day she disappeared, which they said undercut arguments that she died days later.

On the day Ms Trotter went missing, prosecutors said, a witness saw her with a man leaving the Lone Star College - Montgomery library, in The Woodlands, Texas, where she attended school. The Woodlands is about 48km north of Houston.

Half a pantyhose - which belonged to Swearingen’s wife - was wrapped around Ms Trotter’s neck, while the other half was found at his home, prosecutors said in court papers.

On Monday, the Texas Board of Pardons and Paroles denied Swearingen’s request for clemency and the US Supreme Court on Wednesday denied his request for a stay of execution.

Swearingen was the 12th inmate executed in the United States and the fourth in Texas in 2019, according to the Death Penalty Information Center. Texas has executed more prisoners than any other state since the Supreme Court reinstated the death penalty in 1976.–Reuters