Super Tuesday: Four things we learned about US race 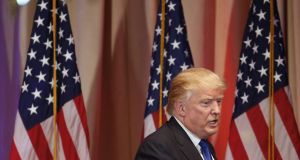 The biggest day of the US presidential battle led to the victories for Donald Trump and Hillary Clinton but four state wins for Bernie Sanders, three for Ted Cruz and one for Marco Rubio showed that their respective two races are far from over.

Here is what we learned from the marathon day of 12 nominating contests.

The billionaire showed his early state wins in the north-east (New Hampshire), the west (Nevada) and the south (South Carolina) were far from flukes and that his unconventional campaign can score victories anywhere.

On Super Tuesday, Trump won in Massachusetts in the north-east and Alabama in the Deep South, and, in between, in Virginia where many of the Washington politicians he loves to bash reside. On a Trump map of America, his colours spread further than anyone else’s.

What was once unthinkable for the Republican establishment is fast becoming thinkable: Trump the presidential nominee. The bombastic businessman has created an existential crisis for the Republican Party. Senior party figures such as Speaker of the House of the Representatives Paul Ryan and the 2012 presidential nominee Mitt Romney have come out strongly but perhaps too late to halt his march to November.

The Republican Party’s failure to take seriously the businessman as he started building a momentum - or to understand the anger of his supporters - may badly hurt the Grand Old Party in the long run.

Trump appeared to be pivoting his campaign towards moderates and a general election head-to-head against Hillary Clinton when he claimed to be a “unifier” once the Republican primary was over.

Asked whether he was approaching politics like business, adopting an extreme position at first before moderating as a final deal is negotiated, the businessman told reporters in front of a scared-looking Chris Christie: “There is always going to be some negotiation.”

Just how can his campaign go?

Hillary Clinton has more than a firewall of minority voters

Clinton, in contrast to 2008 when she lost to Barack Obama, has a huge support base amongst African Americans, so much so that Vermont senator Bernie Sanders doesn’t have a similar amount of support among white voters to overcome her advantage.

The south where African Americans and Latinos have an above-average share of the Democratic primary vote helped Clinton win states by commanding leads over Sanders: from a 22-point gap in Texas to an almost 58-point margin in Alabama. She won more than 70 per cent of the black vote and, in most states, by more than 80 per cent.

Clinton performed strongly too among white voters in the south, winning about six in 10 white voters in Alabama and Arkansas and faring well in the rural parts of Virginia, Alabama and Georgia. This bodes well for the second-time presidential candidate heading up to the Rust Belt states and the blue-collar workers of Ohio and Michigan.

The confidence that comes from winning 10 of the first 15 states was on show at her victory rally in the Ice Palace film studios in Miami when her focus was very much on Trump, not Sanders.

“Instead of building walls, we’re going to break down barriers,” she said referring to Trump’s plan for a walled border with Mexico.

Clinton clearly is setting her sights on the general election.

The Republican and Democratic races are not over

While Trump and Clinton copper-fastened their front-runner status in the respective Republican and Democratic primary races on ’Super Tuesday,’ neither has cleared the path fully to the nomination.

Sanders had a good night. Leaving aside his 72-point rout in his home state of Vermont, he picked up the southern state of Oklahoma and bettered his landslide win in New Hampshire with a 23-point victory in Minnesota, where he had devoted much effort recently.

Clinton has an almost 200-delegate lead on Sanders, not including the super-delegates of party leaders and elected officials she has already locked in. With 15 states down, the 74-year-old socialist senator has promised to fight in each of the remaining 35 states and all the way to the Democratic National Convention in Philadelphia in July.

He has the money to do it too. He raised more than $42 million in February, doubling his January haul, from 1.4 million donations, averaging $40 a donation. This reflects the spread of his support.

Sanders is also still firing up young people. He performed better among the 18-to-29 year old bracket than Clinton in every state except Alabama. This points again to Clinton’s underlying trust problems.

On the Republican side, the three candidates trailing Trump can take something from their Tuesday wins. Texas senator Ted Cruz can point to his 17-point win in his home state and neighbouring Oklahoma as further evidence that he can beat Donald Trump.

Marco Rubio, regarded for most of Tuesday night as the big loser of the 11 state contests, can hold up his late win in Minnesota and a close race in Virginia to sustain him until his home state votes on March 15th.

Ohio governor John Kasich will likely point to his joint second in Massachusetts and runner-up status to Trump in Vermont as reasons to hang in there until his home state votes on the same date as Rubio’s.

Trump may have 302 delegates (who will pick the party nominee at the Republican National Convention in July) to Cruz’s 174 and Rubio’s 104 but the big winner-take-all states of Ohio and Florida on March 15th could open the race up again - if Trump loses. That may be a big ‘if’; he leads by 19 points in the polls in Florida and five in Ohio.

With 15 states down and 35 to go, five candidates are still going on with no signs of the field being winnowed further. That helps Trump.

Trump eked out a win in Arkansas by a measly two points, but this was Ted Cruz country and if the first-time senator is, as he believes the only viable alternative to the New York billionaire, then he should have been clocking landslides against Trump among evangelicals and others.

There are few big southern states left where his Bible-thumping, Washington-baiting campaign might play well. It is hard to see how he can unite the conservative and establishment wings of the party - or even win a general election - given his failure to create any kind of broad coalition so far to mount a strong challenge to The Donald.

Las night Cruz called on everyone but Trump to “prayerfully consider” dropping out so the party could consolidate around him.

In reality, the 45-year-old senator risks going the way of Mike Huckabee in 2008 and Rick Santorum in 2012 when, despite early wins, their support base did not extend beyond evangelical voters.

Slagging Trump off over his bad spelling, small hands and fake tan over recent days appears to have done Marco Rubio little good. He won in Minnesota but only after the TV pundits - and Trump naturally - dismissed him as the biggest loser of the night. He carried on his attacks on Trump on television late last night, calling the businessman “a world-class con artist.” It all seemed a bit desperate at times.

But Rubio survived Survival Night. If Trump beats him in Florida, he’ll be out. Fox News and other conservative media were reporting yesterday that Florida governor Rick Scott was preparing to endorse Trump. If it happens, that would really kill off Rubio’s chances.

And one thing we didn’t learn from Super Tuesday….

Why Ben Carson is still in the race? The retired neurosurgeon has his place in the after-dinner speaking circuit of former presidential candidate assured and has done more than enough to promote his books. The conservative made it out of single digits in just two states on Super Tuesday - Alaska and Alabama - and still came fourth in each.

“Millions of Americans plead with me to continue,” said Carson in a statement.

It seems the Republican Party elders are not among them. It was reported last night by CNN senior party operatives were planning to encourage him to drop out of the presidential race and instead run for a US Senate seat for Florida, where he lives.