Actor, who found fame as Mr Spock on the sci-fi show, passed away in Bel Air home 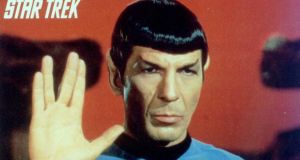 Leonard Nimoy, the sonorous, gaunt-faced actor who won a worshipful global following as Mr Spock, the resolutely logical human-alien first officer of the Starship Enterprise in the television and movie juggernaut Star Trek, died this morning at his home in the Bel Air, Los Angeles. He was 83-years-old.

Mr Nimoy announced last year that he had the disease, which he attributed to years of smoking, a habit he had given up three decades earlier.

He had been hospitalised earlier in the week.

His artistic pursuits - poetry, photography and music in addition to acting - ranged far beyond the United Federation of Planets, but it was as Mr Spock that Mr Nimoy became a folk hero, bringing to life one of the most indelible characters of the last half century: a cerebral, unflappable, pointy-eared Vulcan with a signature salute and blessing: “Live long and prosper.”

Mr Nimoy was teaching method acting at his own studio when he was cast in the original Star Trek television series in the mid-1960s.

The show, which had its premiere on NBC on September 8th, 1966, made Mr Nimoy a star. Gene Roddenberry, the creator of the franchise, called him “the conscience of Star Trek ”.

Though Star Trek was cancelled after three seasons because of low ratings, a cultlike following - the conference-holding, costume-wearing Trekkies, or Trekkers - coalesced soon after Star Trek went into syndication, and ensured Mr Nimoy remained a star.

His fans’ devotion only deepened when Star Trek was spun off into an animated show, various new series and a series of movies starring much of the original television cast, including William Shatner and George Takei.

When director JJ Abrams revived the Star Trek film franchise in 2009, he included a cameo part for Mr Nimoy, as an older version of the same character. Mr Nimoy also appeared in the 2013 follow-up, Star Trek: Into Darkness.

Born in Boston on March 26th, 1931, Leonard Simon Nimoy was the second son of Max and Dora Nimoy, Ukrainian immigrants and Orthodox Jews. His father worked as a barber.

From the age of 8, Leonard acted in local productions, winning parts at a community college, where he performed through his high school years. In 1949, after taking a summer course at Boston College, he travelled to Hollywood, though it wasn’t until 1951 that he landed small parts in two movies, Queen for a Day and Rhubarb.

As well as Star Trek, Mr Nimoy also had a starring role in the television series Mission: Impossible and frequently performed onstage, notably as Tevye in Fiddler on the Roof.

He received an Emmy nomination for the 1982 movie A Woman Called Golda, in which he portrayed the husband of Golda Meir, the prime minister of Israel, who was played by Ingrid Bergman.

Mr Nimoy also directed movies, including two in the Star Trek franchise, and the hugely successful comedy Three Men and a Baby in 1987.

Mr Nimoy made several pop records, and gave spoken-word performances - to the delight of his fans.

His poetry was voluminous, and he published books of his photography.

More recently, Mr Nimoy had a recurring role on the science-fiction series Fringe and was heard, as the voice of Spock, in an episode of the sitcom The Big Bang Theory.