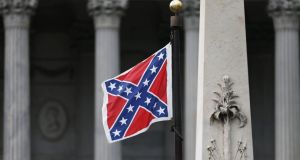 South Carolina Governor Nikki Haley on Monday called on politicians to take down the Confederate battle flag at the state capitol grounds, a week after a white gunman allegedly shot dead nine black worshipers at a historic church.

The flag that has flown at the State House grounds in Columbia for a half century became a fresh focus of criticism after the Charleston church massacre. Federal authorities are investigating the attack as a hate crime and an act of terrorism by accused gunman Dylann Roof (21) who posed with the flag in photos posted online.

“It’s time to move the flag from the capitol grounds,” Ms Haley, a Republican, told a news conference in the state capital, about 161 km from the shooting.

“The flag, while an integral part of our past, does not represent the future of our great state.”

Ms Haley called on politicians, whose normal legislative year wraps up this week, to address the issue over the summer and said she would order a special session if they did not.

The shooting at Emanuel African Methodist Episcopal Church came in a year of intense debate over US race relations following the killings of unarmed black men by police officers, which has sparked a reinvigorated civil rights movement under the “Black Lives Matter” banner.

Opponents of flying the flag at the State House grounds consider it an emblem of slavery that has become a rallying symbol for racism and xenophobia in the United States.

Supporters, who fly the flag at their homes, wear it on clothing and put it on bumper stickers, see it as a symbol of the South’s history and culture, as well a memorial to the roughly 480,000 Confederate casualties during the 1861-65 Civil War. That figure includes the dead, wounded and prisoners.

Wal-Mart Stores Inc, the biggest US retailer, said it is pulling all Confederate flag merchandise from its stores.

“We never want to offend anyone with the products that we offer,” spokesman Brian Nick said in a statement.

Sears Holding Corp said it would remove Confederate flags being sold by third parties on its website.

US senators Tim Scott and Lindsey Graham also urged removal of the flag. Both are Republicans and Graham is seeking the party’s presidential nomination.

Among other Republicans, senators Lamar Alexander and Bob Corker of Tennessee also called for the removal of the flag. Mississippi House Speaker Philip Gunn said on Twitter that the Confederate emblem in his state’s flag had to go.

A group of both black and white leaders called for a rally Tuesday at the State House to bring their demand to politicians.

“The only flag we should be worried about is the US flag,” said Carl Smith, a 29-year-old black man, standing outside the church that was the site of the shooting. “Why would you support a flag that represents division instead of a flag that unites people?”

Roof was arrested on Thursday and charged with nine counts of murder for allegedly gunning down members of a Bible study group at the “Mother Emanuel” church. He is the apparent author of an online racist manifesto.

US president Barack Obama in a podcast posted online on Monday, said the killings showed the United States still had a long way to go in addressing racism, using an epithet to make his point.

“We’re not cured of it,” he told Marc Maron, host of the “WTF” podcast. “And it’s not just a matter of it not being polite to say ‘nigger’ in public. That’s not the measure of whether racism still exists.”

Mr Obama will attend Friday’s funeral of Reverend Clementa Pinckney, a state senator and pastor of the historic church, who was one of the nine people killed on Wednesday.

The debate is not a new one for South Carolina, which raised the flag over the State House in the early 1960s. The flag was moved to its current location, on a lower flagpole on the capitol grounds in 2000, a compromise at a time when some were calling for it to be retired.

A spokesman for the Sons of Confederate Veterans, a group that honors southern Civil War soldiers, called the move premature.

“This is the very worst possible time to be considering historic changes,” said Ben Jones, the group’s spokesman and a former US Representative from Georgia.

“Slavery, it ain’t like it was a Southern sin,”Mr Jones said. “It was a national American sin. It built Wall Street and the American economy.”