Somalis in Minneapolis seek to dampen lure of Islamic State

FBI tactics to catch IS volunteers may be stealthy, but the youth are being radicalised 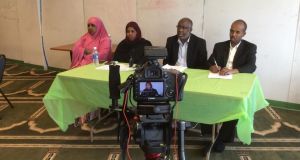 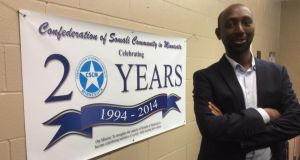 Mohamud Noor, executive director of the Confederation of Somali Community in Minnesota, based in the Cedar-Riverside neighbourhood of Minneapolis, better known as “Little Mo”. Photograph: Simon Carswell

The Minneapolis court is packed with members of the local Somali community here to support one of their own, Abdirahman Yasin Daud (21). His lawyer wants him released from custody while he fights charges of attempting to provide support to a terrorist group.

Daud is one of six Somali men from Minnesota, aged 18-21, charged with trying to travel to Syria to fight with Islamic State, the group designated a terrorist organisation by the US that has seized large swathes of Iraq and Syria and carried out gruesome beheadings of Americans and other westerners.

Daud was arrested last month in San Diego with co-accused Mohamed Abdihamid Farah. The FBI alleges the pair were on their way to buy fake passports and to Mexico to fly to Turkey and on to Syria. Prosecutors last week claimed to have a recording of Farah threatening to kill FBI agents if they tried to stop them travelling to Syria.

Appearing before district court judge Michael Davis on May 22nd, prosecutor Andrew Winter painted Daud as a danger to the world with ambitions to sacrifice himself for IS.

“The defendant sought to become a shahid, a martyr,” Winter said. “A martyr is not created absent carnage, a suicide vest or car bomb.”

Daud has pleaded not guilty and his lawyer, Bruce Nestor, said he was being unfairly treated as the US government did not stop other Americans travelling overseas to fight for the IRA, for Israel or even for Christian militias carrying out beheadings in Iraq and Syria.

The judge ruled with the government, agreeing that Daud was a flight risk. He remanded him in custody pending trial.

Some of their friends were captured en route; others slipped through. They include Abdi Nur who, like others who joined militant groups, has tried to help friends back home follow them.

Even though the group was under surveillance by the FBI for some time – Daud’s step-sister said last week the FBI tried to recruit her and her son two years ago – and some of their friends had been charged with criminal offences, the others still tried to travel.

“What is remarkable about this case is that nothing stopped these individuals from pursuing their goal,” said Minnesota’s US attorney, Andy Luger, last month.

At least 15 young men are estimated to have travelled to Syria to join IS, while US investigators estimate at least 100 Americans have joined Islamic militant groups in the war-torn country.

The flight of American extremists has alarmed the US government, particularly since the 2013 Boston marathon bombings and the attacks on the Charlie Hebdo magazine offices in Paris in January.

While US intelligence estimates that most of the 7,000 foreign fighters in Syria are from Europe, last year the then US attorney general Eric Holder called the country “a cradle of violent extremism” and urged international action to tackle the threat of radicalised fighters from the US and Europe travelling there.

The ties between the liberal midwestern state of Minnesota and homegrown jihadis are not new. More than 20 Somali men have travelled to their ethnic homeland since 2007 to fight for al-Shabaab, the terrorist group responsible for last month’s attack on a university in Kenya that killed 148.

Community leaders in Minnesota say they travelled there initially in the belief they were fighting for patriotic reasons in Somali, a country beset by conflict since 1991, and ended up involved in terrorism.

Last year, the terrorism link to Minnesota shifted to Syria after it emerged that Abdirahmaan Muhumed, a Somali-American, and Douglas McAuthur, an African-American, who grew up outside Minneapolis, were killed fighting for IS.

In the latest cases, the Somali community has been shocked by the FBI’s tactics – the use of a paid informant to infiltrate their youth and help indict the six men. Outside court, Hassan Mohamud, an imam at the Minnesota Da’wah Institute in nearby St Paul, is trying to understand what led to these charges: “Is it the government playing political games or someone who is trying to recruit our kids to various organisations?”

Just under two miles away from the court house is the Cedar-Riverside neighbourhood known as “Little Mo”, short for Mogadishu, the Somali capital. The Twin Cities of Minneapolis and St Paul are home to the largest population of Somali-Americans in the US, about 30,000 people. In total, between 85,000 and 100,000 Somali-Americans live in Minnesota, a state with 5.5 million people.

Somali community leaders say the area has rich potential for recruitment by radical groups as they take advantage of poverty, a sense of alienation and a lack of purpose felt by young Somalis.

A report published by the University of Southern California last month found that almost 35 per cent of Somali households in Minnesota are headed by single parents, 55 per cent live in poverty – 3½ times the general US population rate – and that almost a third of the community 16 and older is unemployed.

Poorly educated in their own religion and with few role models from their own community, young men are easy prey to groups like IS who play on a persecution of Islam.

Daud is the third-youngest of 12, the court heard . The woman he calls his mother is in fact his 34-year-old step-sister as his parents are elderly and live in community housing. Daud lived with her, her three children and one younger sibling. As she worked 60 hours a week, he helped mind her children.

“When parents are trying to make ends meet, they don’t put enough time into guiding their kids. Somebody else is going to guide them,” said Mohamud Noor, executive director of the Confederation of Somali Community in Minnesota, a group based in Cedar-Riverside.

There is a disconnect between the elders who left Somalia over the past quarter-century and their children who are struggling to fit in and are confused about whether they are Somalis or Somali-Americans.

“Isis [another name used for Islamic State] sees these things as an opportunity to tell these young people that you don’t belong here, why don’t you just come over?” said Mohamed Farah, executive director of Ka Joog.

The group was started in 2007 to encourage youngsters to avoid negative influences around them and in easily accessible social media that links them with faraway fighters.

Ka Joog means “stay away” or “stay out”. “It’s a strong Somali word that relates to young people,” said Farah.

Mosques and community groups in Minnesota have formed a taskforce to understand better the problems among the disaffected youth and repair their relationships with parents and religious leaders. “We know there is a gap,” said Iman Hassan Mohamud. “We are trying to close that gap so our kids can get the right advice.”

In his office in “Little Mo”, Sadik Warfa shows me a propaganda video slickly produced by IS circulating online. The footage shows well-dressed and armed Somali jihadi leaders appealing to Muslims to fight, edited with grisly images of executions and beheadings of kuffars or infidels. Warfa recoils, disgusted at the violence.

He despairs that the Somali people in Minneapolis don’t even have a community centre where the young can socialise. There has been chronic under-investment here, he says.

The problem isn’t the mosques, he says; they are trying to “clear the way”. The young are being radicalised because they only have a limited knowledge of the Koran and don’t listen to the imams or their elders.

“The problem is we have this new wave of media that is way ahead of us,” he said. “You can be your own storyteller, you can have your own followers and you can influence people.”