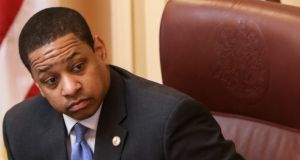 Justin Fairfax said in a statement that he would not resign from office and vowed to clear his name. Photograph: Logan Cyrus/Getty Images/AFP

A second woman has accused the deputy governor of Virginia of sexual assault, claiming the Democrat raped her 19 years ago while they were both students at university.

A lawyer for Meredith Watson (39) alleged in a statement that Justin Fairfax had attacked her in 2000, and it described the assault as “premeditated and aggressive”.

The statement noted that while Ms Watson and Mr Fairfax had been social friends, they were never involved romantically.

The lawyer, Nancy E Smith, said her team has statements from former classmates who said Ms Watson had “immediately” told friends that Mr Fairfax had raped her.

A New Jersey public relations firm representing Ms Watson provided a 2016 email exchange with a female friend and 2017 text exchanges in which Ms Watson said Mr Fairfax had raped her. She also expressed dismay about his run for political office.

Mr Fairfax shot back at his accusers quickly, saying in a statement that he would not resign from office and vowing to clear his name against what he described as a “vicious and co-ordinated smear campaign”.

Duke University spokesman Michael Schoenfeld said its police department has no criminal reports naming or involving Mr Fairfax, adding that any accusation made through the student disciplinary process would be protected by student privacy laws.

Police officials in Durham, North Carolina, where Duke is, said they have no records of an accusation against Mr Fairfax in 2000.

The latest accusation against Mr Fairfax came two days after Vanessa Tyson, a 42-year-old political science professor, alleged publicly that he had sexually assaulted her in a Boston hotel room during the 2004 Democratic National Convention.

The accusations against Mr Fairfax have rocked an administration that is already struggling amid calls for the resignation of Virginia governor Ralph Northam over a racist photo that appeared on his 1984 medical school yearbook page.

Mr Fairfax would be in line to become governor if Mr Northam resigned.–PA