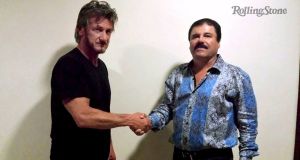 US investigators will examine actor Sean Penn’s interactions with Joaquin “El Chapo” Guzman, two US government sources have said, but it is unclear if prosecutors would try to force the actor to turn over information about his interview with the recaptured drug kingpin.

Mexico is pressing the US government, which has requested Guzman’s extradition, to find out more about Penn’s dealings with the head of the Sinaloa drug cartel, according to one US government source who requested anonymity because he was not authorised to speak publicly about the case.

Rolling Stone magazine rushed Penn’s 10,000-word article to publication on Saturday after Mexican officials captured Guzman in a dramatic raid, ending a months-long manhunt following his July escape from a maximum security prison. The only interview the drug lord is believed to have given in decades was brokered with the help of the Mexican television star Kate del Castillo.

Mexico’s attorney general on Monday said her office has an open line of investigation into Penn’s meeting with Guzman, saying their rendezvous – captured by Mexican surveillance – was an “essential” element in the drug lord’s arrest.

If US authorities ultimately subpoena Penn or want him to testify against Guzman, it would be difficult to force the actor to reveal facts beyond the published interview, since he could invoke “journalistic privilege”, which in some cases protects reporters from divulging information about their work, said lawyers with expertise in US media law.

The question of journalistic privilege has been a hotly debated topic in the United States, with federal courts disagreeing on how much reporters are protected.

Representatives for Penn did not respond to a request for comment. The actor told the Associated Press in a brief email conversation that he has “nothin’ to hide.”

Mike Vigil, former DEA chief of international operations, who has been briefed on the Guzman investigation by US and Mexican law enforcement, said there is a “very strong possibility that Penn and Del Castillo are going to have to testify”.

Beyond requiring Penn to testify or hand over information, it would be extremely unlikely that US authorities would have grounds to bring criminal charges against Penn himself, the sources said.

Unless Penn aided and abetted Guzman in some way, the Oscar-winning actor would not have a duty to disclose to authorities that he was talking to a fugitive, legal experts said.

Even though Penn is a well known actor, there is little doubt he was engaged in a journalistic endeavour when he met one of the world’s most wanted men, said George Freeman, director of the Media Law Resource Center, a non-profit group in New York.

“Being a movie star wouldn’t disqualify him from the journalistic privilege,” said Mr Freeman.

A disclaimer on the article says it was submitted to Guzman for approval before publication, a practice that several renowned journalists and professional organisations have criticised. The government could try to argue Penn’s article is not journalism and therefore not protected, but that argument would be difficult to win, said Mr Freeman.

Prosecutors might also try to say the actors were not working as a journalists because Guzman’s original interest in connecting with Del Castillo was for a movie deal, according to Penn’s account.