Samantha Power and the power of ideals

As Barack Obama’s choice as next US ambassador to the UN, Irish-born Samantha Power faces many challenges 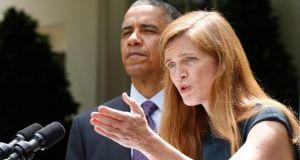 Samantha Power has been nominated by US president Barack Obama to be the new US ambassador to the UN. Photograph: Jason Reed/Reuters

In brief remarks after being announced as US president Barack Obama’s choice as next US ambassador to the United Nations, Samantha Power recalled coming from Ireland as a nine- year-old wearing a red, white and blue, stars and stripes T-shirt. She noted learning quickly that to find opportunity in the US “one didn’t need to wear the flag, one simply needed to live up to it”.

The evocation of ideals is typical of Power, who is poised to become perhaps the most senior Irish-born US government official. Once an outsider with a Dublin accent, she has become an influential insider within the Obama administration while not forgetting the emerald isle.

Power’s remarkable journey has a moral ground zero: Bosnia. A freelance reporter as that terrible war raged in the early 1990s, she witnessed first hand the attempt by the UN to remain neutral in a country where genocide was unfolding.

The experience was searing and launched her into a passionate intellectual engagement with the question of genocide. Her book, A Problem from Hell, which won a Pulitzer Prize in 2003, was a widely read prosecutor’s brief of the moral shortcomings of the US response to mass killing in the 20th century. Obama, a rising young senator from Illinois, read it, and convinced Power to work for him in 2005.

Power’s second major book, Chasing the Flame, tackles the successes and failures of the UN in addressing human security emergencies through the life story of one UN official, the charismatic Brazilian diplomat Sérgio Vieira de Mello. Power first met him in Bosnia and like many was anguished by his tragic death in 2003 after the bombing of the UN compound in Iraq.

‘Good souls’
The book reveals an evolution in Power’s thinking. There is less strident moralism and greater empathy for “good souls” working in terrible conditions with limited resources who negotiate with war criminals for modest ends.

The book ends with a series of “lessons” that reflect Power’s aspiration to develop pragmatic rules that can promote human security in a complex world. Legitimacy matters, spoilers need to be engaged, fearful people must be made more secure and dignity is crucial for order, while outsiders should always proceed with humility and patience. Major states have a responsibility to protect vulnerable masses of people.

But genocide cannot be rectified by “good souls” alone. US leadership and inspiration are needed but the political system hardly inspires. As Obama’s former academic colleague Lawrence Lessig argues, the primordial problem in the US political system is the dependency of politicians on campaign contributions from special interests. This may spell immediate problems for Power, who faces Senate confirmation for her post.

Irish shtick usually works well in Congress but Power could be an inviting target for those looking to symbolically beat up the Obama administration to generate campaign dollars.

Under scrutiny
Power, as a public rite of passage, will have to articulate strong fidelity to Israel and antipathy for Iran’s nuclear ambitions. Her role in Nato’s Libyan intervention and views on arming Syrian rebels will come under particular scrutiny. The Syrian tragedy may well cause Power the greatest difficulty as arming “vetted rebels” is the latest preoccupation of those wedded to robust use of US military dominance in the Middle East.

Power supports the use of US military assets to preempt large-scale war crimes. But is the desire to prevent genocide itself dangerous in civil war contexts whose micro-dynamics are fluid and murky? Is Syria another Bosnia, where US intervention ended a war, or another Iraq, where US intervention started one?

Power’s confirmation hearing will be intriguing, and require careful rhetorical nuance on her part. Living up to the flag and “responsibility to protect” can mean many things. Under George W Bush they generated a moral righteousness, born of nationalist hubris, which got the US into such difficulties in Iraq.

Assuming she gets there, Power will face many challenges at the UN. Managing the contradictions between US human rights rhetoric and US national security interests will present challenges. What, for example, if Israel acts unilaterally against Iran and kills many civilians in the process?

Ideals matter in international affairs. Power brings considerable credibility on human rights to the table at the UN for the US. Keeping it will be a challenge.