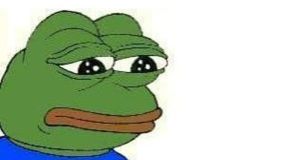 Pepe the Frog, also known as the ‘sad frog meme’.

Pepe the Frog, a green frog with red lips created by cartoonist Matt Furie in 2005, has been labelled an “online hate symbol” by the Anti-Defamation League (ADL) after his adoption by the white supremacist movement.

“Images of the frog, variously portrayed with a Hitler-like moustache, wearing a yarmulke or a Klan hood, have proliferated in recent weeks in hateful messages aimed at Jewish and other users on Twitter,” the ADL said, explaining its decision to add the meme to its online Hate on Display database.

The campaign wrote that “in recent months, Pepe’s been almost entirely co-opted by the white supremacists who call themselves the ‘alt-right’. They’ve decided to take back Pepe by adding swastikas and other symbols of anti-Semitism and white supremacy.

“Now white supremacists have given Pepe the cartoon frog some Trump hair - and the candidate’s own son says he is ‘honoured to be grouped with’ him,” the post concluded.

The character of Pepe was originally created for Furie’s comic Boy’s Club, but achieved online fame in 2008 when the 4Chan forum took a shine to the character.

Depending on one’s point of view, the anonymous users of 4Chan adopted, remixed, or stole Pepe, placing him in new situations and permanently linking him with the phrase “feels good man”, which was the punchline to the first comic featuring Pepe to hit the forum.

For almost a decade, Pepe existed mostly as a meme on the internet.

Rise of the ‘alt-right’

However, in 2016, the rise of the “alt-right” - the group that sits at the crossover of 4Chan and neo-Nazism - led to Pepe being adopted as an unofficial icon.

The second life has disturbed Pepe’s creator, who told The Guardian: “I just try to take it in stride, but the thing that’s come to my attention is, well, I didn’t know what white nationalists were until, like, yesterday.

“And the alt-right or whatever? It’s all very new and very strange and definitely not something that I support. I guess Pepe is kind of its own internet thing now.

“I’m hoping not to get any hate or threats or anything. You have to do a little bit of research to even link it back to me, I think.”

The chief executive of the ADL, Jonathan Greenblatt, emphasised the twisted nature of Pepe’s genesis as a hate icon.

“Once again, racists and haters have taken a popular internet meme and twisted it for their own purposes of spreading bigotry and harassing users,” he said.

“These anti-Semites have no shame. They are abusing the image of a cartoon character, one that might at first seem appealing, to harass and spread hatred on social media.”

It’s the second time the alt-right has managed to create a new hate symbol.

In June, the ADL added the (((echo))) symbol to its watchlist after online antiSemites had been spotted using it to identify Jewish users on social media.