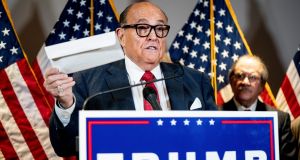 When Rudy Giuliani was treating his efforts to carry out US president Donald Trump’s wishes to overturn the results of the 2020 election as a payment opportunity – he proposed a daily retainer of $20,000 for his legal services from the burgeoning Trump campaign legal fund – the president dismissed it and responded by demanding to personally approve each expense.

Nine weeks and another impeachment later, Trump began the day on Thursday by asking aides to erase any sign of a rift. Stripped of his Twitter account, Trump conveyed his praise through an adviser, Jason Miller, who tweeted: “Just spoke with President Trump, and he told me that @RudyGiuliani is a great guy and a Patriot who devoted his services to the country! We all love America’s Mayor!”

White House officials are universally angry with Giuliani and blame him for both of Trump’s impeachments. But the president is another story. Even as he complains about Giuliani’s latest efforts as fruitless, the president remains unusually deferential to him in public and in private.

“Don’t underestimate him,” Trump has told advisers. But only up to a point. While Trump and his advisers baulked at the $20,000 request weeks ago, it is unclear whether the president will sign off on Giuliani being paid anything other than expenses.

The on-again, off-again tensions are a feature of a decades long, mutually beneficial relationship between the former New York City mayor from Brooklyn and the former property developer from Queens. Although the two were never particularly close in New York, Trump enjoyed having the former mayor as his personal legal pit bull during the special counsel investigation into his campaign’s ties to Russia.

In return, Giuliani, who failed at his own bid for the presidency in 2008, got to hang out with the president in the Oval Office and used his new connections to pursue lucrative contracts.

Trump deployed Giuliani on politically ruinous missions that led to his impeachment – twice. Now, isolated and stripped of his usual political megaphones, the president faces the devastation of his business and political affairs for his part in encouraging a pro-Trump mob that went on to attack the Capitol on January 6th.

Giuliani – who, for his part, encouraged a group of the president’s supporters that day to carry out “trial by combat” – is one of few people still willing and eager to join Trump in the foxhole.

While most lawyers are reluctant to represent the president in a second Senate impeachment trial, Trump advisers said Giuliani remained the likeliest to be involved. Despite president-elect Joe Biden’s certification as the winner, Giuliani has continued to push unproven theories about the election results and falsely attributed the violence to anarchists on the left.

A podcast hosted by Steve Bannon, Trump’s former chief strategist, was taken down Thursday because of an interview in which Giuliani repeated false claims about the election. During the interview, Bannon pleaded with Giuliani to move on to a new topic.

“I don’t mind being shut down for my craziness,” Bannon told Giuliani, according to Alexander Panetta, a reporter for CBC News who listened to the podcast before it was removed. “I’m not going to be shut down for yours.”

Trump has always had an abundance of yes men and women around him, but Giuliani occupies a unique space in his orbit. Few people have had such durability with the president, and few have been so willing to say and do things for him that others will not.

“Your typical role as legal counsellor is to tell your client the hard truth and walk them away from risk,” said Matthew Sanderson, a Republican political lawyer based in Washington. “Rudy instead seems to tell his client exactly what he wants to hear and walk him toward risk like they’re both moths to a flame.”

That journey has left him looking the worse for wear. Days after the election, Giuliani hit the road, challenging the results in a much-maligned news conference in front of a Pennsylvania landscaping company. In another appearance that month, Giuliani was on camera with black liquid, apparently hair dye, streaming down his face as he railed against the election outcome.

Few have been so willing to defend the president, and, paradoxically, few have been so damaging to his legacy. Giuliani stepped into the president’s legal affairs in April 2018. His eagerness to attack special counsel Robert Mueller impressed Trump, who was constantly making changes to his legal team. Most Trump advisers came to see Giuliani’s efforts with Mueller as a success.

“There was never a moment when Rudy wasn’t willing to go lower, and that’s what Trump requires,” Trump biographer Michael D’Antonio said. “He proved that actually delivering for Donald was not as important as continuing to try.”

In addition to his work with Trump, Giuliani pursued side projects with the added cachet of being the president’s personal lawyer. Free of ethics laws that restrict government employees, Giuliani pursued lucrative deals even in the midst of the special counsel investigation.

And then came the impeachments. When the history of the Trump presidency is written, Giuliani will be a central figure, first by pursuing a pressure campaign against the Ukrainian government to investigate Biden’s family members and then by travelling the US in efforts to overturn Biden’s victory.

Giuliani’s own legal problems have mounted alongside those of the president. As Giuliani pursued separate business opportunities in Ukraine, intelligence agencies warned that he could have been used by Russian intelligence officers seeking to spread disinformation about the election – reports that Trump shrugged off.

Giuliani’s work in Ukraine continues to be a matter of interest in a continuing investigation by federal prosecutors in New York. And his remarks to Trump supporters before the Capitol riot are now the subject of an effort by the New York State Bar Association to expel him.

Giuliani appears undeterred. In a 37-minute video published on Wednesday evening, Giuliani tried to rewrite the history of the Capitol riot. Although Trump incited his supporters to march to the building and “show strength”, Giuliani suggested in the video that Antifa activists had been involved, a repeatedly debunked theory that has proliferated in pro-Trump circles online.

“The rally ended up to some extent being used as a fulcrum in order to create something else totally different that the president had nothing to do with,” Giuliani said.

Now his calls to the president are sometimes blocked at the orders of White House officials. Advisers say that Jared Kushner, Trump’s son-in-law, holds Giuliani partly responsible for the mess currently embroiling the White House. But Giuliani hangs on in the shrinking circle around Trump.