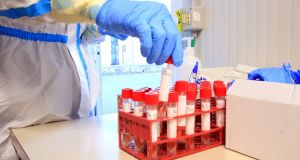 The probe will additionally look into whether Italy’s 15-year-old national plan of action in case of a pandemic had been updated prior to the outbreak. Photograph: Paolo Salmoirago/EPA

Italian police seized documents from the health ministry in Rome on Thursday as part of an investigation into the handling of the initial phase of its coronavirus epidemic, two sources with direct knowledge of the matter said.

The tax police also went to the offices of the national health institute in Rome and the Milan headquarters of the regional government of Lombardy, the sources said.

In the spring, prosecutors in the northern city of Bergamo – the worst hit in Italy during March and April – began looking into possible criminal responsibility for the outbreak.

Originally, the inquiry centred on why the Bergamo area was not cordoned off as a so-called “red zone”, and why a hospital where the outbreak began was not quickly closed.

It has since been broadened to look into whether Italy’s 15-year-old national plan of action in case of a pandemic had been updated prior to the outbreak, and whether it was implemented properly.

“This is the reason police were told to acquire documents, including emails, digital messages and minutes of meetings and discussions at the ministry and the other public offices,” one of the sources said.

No individuals were under investigation in this branch of the inquiry so far.

Separately, the Bergamo prosecutors also recently questioned officials at the World Health Organization (WHO) regarding a critical report on Italy’s coronavirus response which was published on the WHO’s website and then immediately removed.

The WHO said it had been removed because of “factual inaccuracies”, but declined to say what these were.

WHO official Francesco Zambon, who co-authored the report, said last week that the prosecutors had questioned him about the affair.

Mr Zambon told Reuters television he was “shocked” to discover Italy’s pandemic plan had not been updated, but that many other countries were in a similar position despite repeated WHO guidelines urging states to review these national plans and overhaul them if necessary. – Reuters