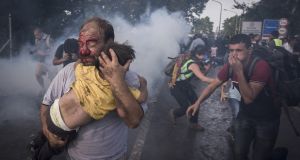 A migrant holds his child during a clash with Hungarian riot police at the Horgos border crossing in Serbia on September 16th, 2015. Photograph: Sergey Ponomarev/The New York Times

Reuters and the New York Times shared the Pulitzer Prize on Monday night for breaking news photography for images of the migrant crisis in Europe and the Middle East.

The Associated Press won the award for public service for a report on labour abuse in the seafood industry and the Los Angeles Times took the prize for breaking news reporting for its coverage of the San Bernardino massacre.

The New York Times had a record 117 Pulitzer prizes and citations before this year and added two more in 2016, also winning for international reporting.

The Boston Globe, the Tampa Bay Times and the New Yorker magazine also won two awards each this year.

The winners in all 21 Pulitzer categories – including awards for journalism, music, drama and letters – were announced at New York’s Columbia University, which administers the awards, now in their 100th year. The Pulitzers began in 1917 after a bequest from newspaper publisher Joseph Pulitzer.

In the awards for letters, drama and music, the hit Broadway musical “Hamilton” by Lin-Manuel Miranda won for best drama. The Pulitzer board called it “a landmark American musical about the gifted and self-destructive founding father whose story becomes both contemporary and irresistible.” 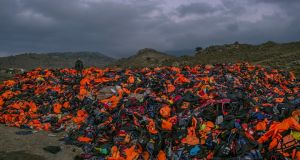 Viet Thanh Nguyen won the fiction award for “The Sympathizer,” an immigrant story about a “man of two minds” and two countries, Vietnam and the United States.

The board awarded the history prize to the TJ Stiles book, Custer’s Trials: A Life on the Frontier of a New America.

The Reuters photo coverage was led from Greece by Yannis Behrakis, chief photographer for Greece and Cyprus. He and others captured a series of images of migrants crowded on flimsy sea craft and their first moments upon reaching European territory.

“We showed the world what was going on, and the world cared. It showed that humanity is still alive,” Behrakis said.

Some showed families rushing ashore, flailing away in the water or collapsing on the beach. Others juxtaposed the rafters at sea with a cruise ship or a leaping dolphin or the setting sun.

The Reuters photo staff was named as co-winner for breaking news photography along with Mauricio Lima, Sergey Ponomarev, Tyler Hicks and Daniel Etter of the New York Times.

The AP’s prize-winning report was an investigation into the mistreatment of workers used to supply seafood to American supermarkets and restaurants. The coverage resulted in the freeing of 2,000 slave labourers and sweeping reforms, the board said.

The Tampa Bay Times and the Sarasota Herald-Tribune shared the 2016 prize for investigative reporting. The two Florida newspapers won for collaborative reporting on violence and neglect in the state’s mental hospitals.

The Tampa Bay Times took a second Pulitzer, with three of its reporters being honoured for showing the consequences of a school board turning some county schools in to “failure factories.”

The prize for national reporting went to the staff of the Washington Post for developing a database on fatal police shootings and those likely to fall victim.

Alissa J Rubin of the New York Times won in the international reporting category for her stories on the inhumane treatment of Afghan women.