Analysis: Insults and policy jabs flew in a debate that came at a crucial point 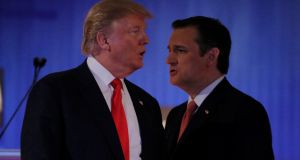 Donald Trump and Ted Cruz are battling out for the top spot in the closely-watched Iowa ballot in the middle of America, even though the property magnate has a strong lead nationally. Photograph: Chris Keane/Reuters

“I guess the bromance is over,” Donald Trump said in the spin room after the seven highest-polling candidates racing to be the Republican presidential nominee clashed in the party’s sixth debate.

Trump and Texas senator Ted Cruz, his closest rival in the hard-fought primary, took the gloves after months of cordiality and back-slapping. Things were very different in South Carolina on Thursday night. How much has changed between just two debates.

At this critical stage, there’s too much at stake. Less than three weeks away from the Iowa caucuses, the country’s inaugural presidential nominating contest, Trump and Cruz are battling out for the top spot in the closely-watched ballot in the middle of America, even though the property magnate has a strong lead nationally.

Florida senator Marco Rubio and New Jersey governor Chris Christie came out swinging too as they press their case as establishment alternatives to the conservative frontrunners Trump and Cruz. In the governor ranks, Jeb Bush and John Kasich struggled to make an impact, while former doctor Ben Carson still seemed out of his depth.

Cruz was ready. “Back in September, my friend Donald said he had his lawyers look at this in every which way and there was no issue there. There was nothing to this birther issue,” said the freshman senator. “Now since September the constitution hasn’t changed. But the poll numbers have.”

Cruz seemed to get at The Apprentice TV star when he suggested that, based on the birther conspiracies he was relying on, Trump himself might not be eligible to be president given his Scottish-born mother.

Trump admitted that Cruz’s improving poll numbers were behind his birther claims, drawing boos from the audience, but he persisted in questioning the legal status of the Texan’s candidacy. “I choose him as my vice-presidential candidate and the Democrats sue because we can’t take him along for the ride – I don’t like that,” said the businessman.

Trump enjoyed his best debate performance of the campaign so far, even managing to show a human side that has been absent from his shrill, bombastic campaign.

Asked when he meant when he accused Trump of embodying “New York values”, Cruz said that everyone outside the city understood that values there are “socially liberal or pro-abortion or pro-gay marriage, focus around money and the media”, attempting to undermine Trump’s conservative credentials. The accusation backfired.

The businessman replied with a rare emotional response, recalling the spirit and solidarity of New Yorkers after the 9/11 attacks. He drew applause from the Republican audience, even forcing a chastened Cruz to clap him awkwardly too just moments after bashing New Yorkers.

Rubio put in yet another compelling performance. He attacked Cruz for flip-flopping on policies to curry favour with Iowans. “That is not consistent conservatism, that is political calculation,” he said.

This debate showed how Trump’s bellicose, anti-establishment campaign – against the backdrop of the Paris and San Bernardino attacks – has changed the tenor of the Republican primary race, pushing candidates such as Rubio and Christie to the right and injecting a darker, angrier tone into the overall campaign.

Bush was notably the only candidate on Thursday’s debate stage to criticise Trump’s proposal to bar Muslims from entering, showing how much the billionaire has changed the party’s presidential election.