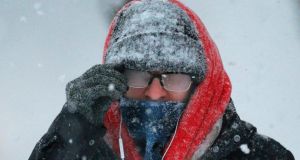 A pedestrian with his glasses fogged over walks through the snow during a winter blizzard in Cambridge, Massachusetts. Photograph: Brian Snyder/Reuters 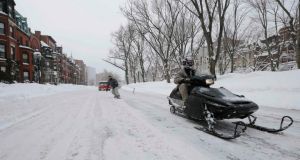 A snow-mobile pulls a man on snow board on Commonwealth Avenue in Boston, Massachusetts. Photoghraph: Brian Snyder /Reuters 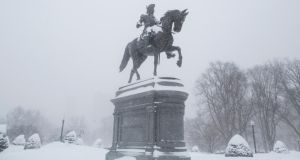 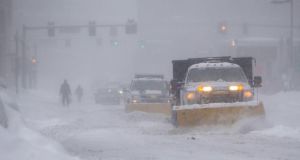 Snow ploughs make their way down Kneeland St .during winter storm Neptune which dropped over a foot of snow in Boston, Massachusetts.Photograph:Scott Eisen/Getty Images

Record-breaking cold gripped the Eastern United States on Monday as an icy winter storm crippled the nation’s central states before it was expected to barrel toward the mid-Atlantic in time to snarl Tuesday’s morning commute.

Freezing rain encased Nashville in ice, cancelling flights and closing Interstate 24, according to the Tennessee Department of Transportation.

Cars skidded off roads near Louisville, Kentucky, where there were six times the usual number of accidents and a fleet of more than 1,000 snow plows tried to clear slick roads, officials said. “It’s been all hands on deck,” said Chuck Wolfe, spokesman for the Kentucky Transportation Cabinet.

The storm, which dumped 10 inches (25 cm) of snow on Cincinnati, causing roadway accidents and closing universities, was headed for the nation’s capital later on Monday, with up to 12 inches of snow expected, said NWS meteorologist Brian Hurley.

“Washington and Baltimore - that’s where the bulls eye’s going to be,” Mr Hurley said. About 50 million Americans were under wind chill advisories as the mercury plunged to new depths, breaking records in New York, where it was 5 degrees Fahrenheit (minus 15 Celsius) compared with the previous record for February 16 of 9 F (-12C) in 2003, and Washington DC., where it was 6 F (-14C) compared with 11 F (-11C) recorded in 1987, said Hurley.

Boston scrambled on Monday to clear more than a foot (30 cm)of snow that fell over the weekend, making February the city’s snowiest month ever, before the approaching storm comes its way.

By Thursday morning, the Boston area could see another 8 inches of snow, Hurley said. “The heaviest stuff will be close to the coast in eastern Massachusetts, ” Mr Hurley said. The new storm will be followed by another Arctic front, bringing frigid cold to the Eastern United States by Thursday or Friday, Mr Hurley said.