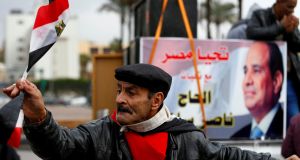 Supporters of Egyptian president Abdel Fattah al-Sisi celebrate in Tahrir square in Cairo on the seventh anniversary of the uprising that ended the 30-year reign of Hosni Mubarak. Photograph: Mohamed Abd El Ghany/Reuters

Egypt has come full circle since the uprising erupted across the country on January 25th, 2011: from rule by a weary, elderly air force autocrat to the reign of an aggressive, middle-aged army intelligence autocrat.

The giddy, democratic, pluralist mass uprising that ousted 30-year president Hosni Mubarak and captured the imagination of the world has been overpowered by Muslim fundamentalists and the military, leaving Egyptians sombre, repressed and divided.

The final blows to the dream of “bread, freedom and justice” inspired by the uprising that Egyptians called a “revolution” were dealt on Wednesday when President Abdel Fatah al-Sisi formally submitted his candidacy for a second term and his last serious rival Khaled Ali withdrew from the race. The vote is to be held on March 26th-28th.

Ali is a prominent rights lawyer who ran in Egypt’s first multi-candidate presidential election in 2012 won by the Muslim Brotherhood’s Mohamed Morsi. This time Ali enjoyed the backing of Destour (Constitution), one of the few surviving post-uprising parties. He complained that his supporters were threatened, the electoral process is corrupt and there is no contest.

On Tuesday, an ex-army chief of staff, Sami Anan, was arrested for failing to obtain permission from the military after he declared his intention to run. Former premier and air force commander Ahmad Shafiq stood down under pressure when he returned to Cairo after five years of exile in the Gulf. He narrowly lost the 2012 election to Morsi, who was deposed in 2013 by Sisi following popular protests against Brotherhood rule.

Anan and Shafiq might have posed major challenges to Sisi. While nonentities could still stand, the third post-uprising presidential election has turned into a referendum on Sisi.

In May 2014 the country was plagued by debt, jihadi bombings, economic turmoil and deepening distress for the majority of 92 million Egyptians when Sisi, a former armed forces chief, was elected by 97 per cent of the 47 per cent who voted. His opponent, leftist Hamdeen Sabahi, secured 3 per cent.

Egypt was gripped by “Sisi mania”. He was expected to cure Egypt’s ills and launch an era of democracy. Sisi pledged to deliver security, a healthy economy, jobs and sustenance for the poorest 40 per cent of Egyptians.

Sisi mania has waned. Instead of building schools, hospitals and housing for needy Egyptians, the president adopted the pharaonic practice of carrying out mega-projects. He constructed a second Suez Canal costing $8.2 billion (€6.6 billion), financed by local investors who may not recoup their investment as revenues have disappointed.

Last December, Sisi inaugurated a new administrative “capital” to replace Cairo. The city, set in the desert between Cairo and Suez, is meant to be completed between 2020-2022 at a cost of $45 billion.

Critics of these ambitious projects argue the money could be better spent on shoring up Cairo’s deteriorating neighbourhoods, tackling pollution and resurfacing roads.

Sisi has imprisoned the entire Brotherhood leadership and thousands of members. And, in response to critics, he has clamped down on the press, human rights groups and activists who orchestrated the uprising.

Aware of faltering support among voters, Sisi is taking no chances. Supporters canvassing voters are handing out food and cash to the poor.

In the last election in December 2010 of Mubarak’s long reign, only 10-11 per cent of voters cast ballots. Sisi will exceed this percentage since the election commission is likely to inflate the turnout figure, as was the practice during Mubarak’s tenure.